4WD Meeting at the Trailhead

So what do you think you’re going to meet with when you take your dog for a walk up one of the Mount Fuji forest hiking trails close to my house? Think you might meet a herd of Japanese Shika deer?

Yeah, you might do. You’ll meet them quite often, actually.

How about a troop of wild boar?

Sure can do. You’ll meet them less often than the deer, of course, but watch yourself because the boar are smart and can get a wee bit peeved if you stumble across them suddenly.

Now how about a herd of Nissan four wheel drives? 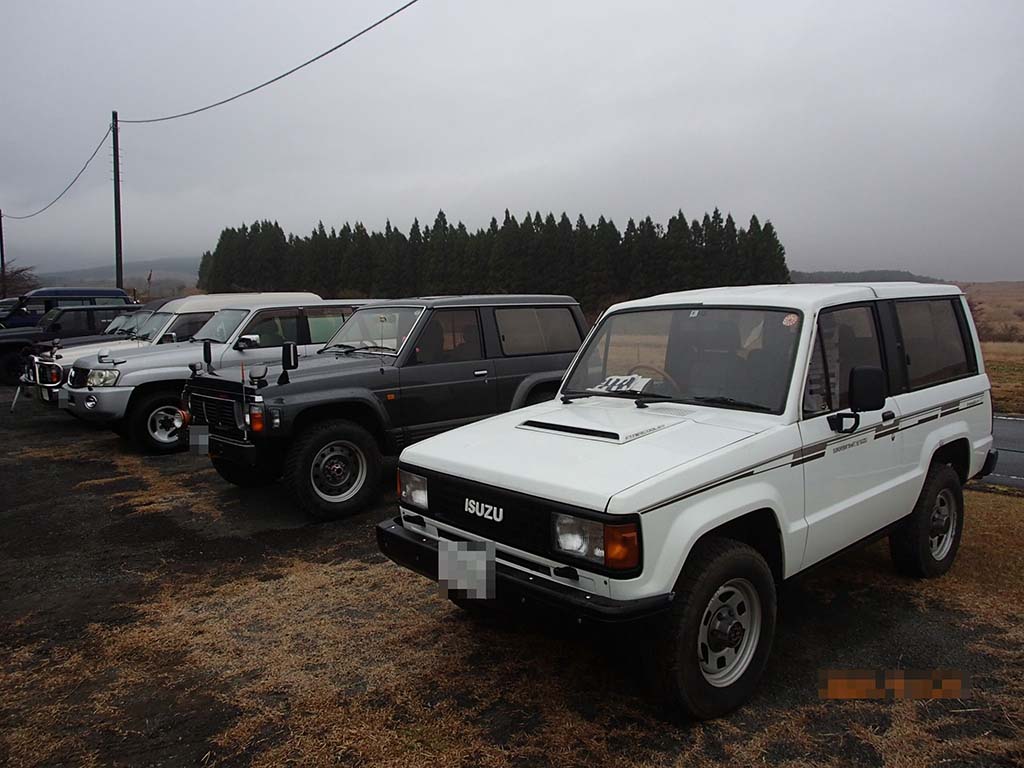 Well, that’s what the dog and I stumbled across at the trailhead parking lot on a recent rainy Sunday as we were setting off for a nice forest walk. 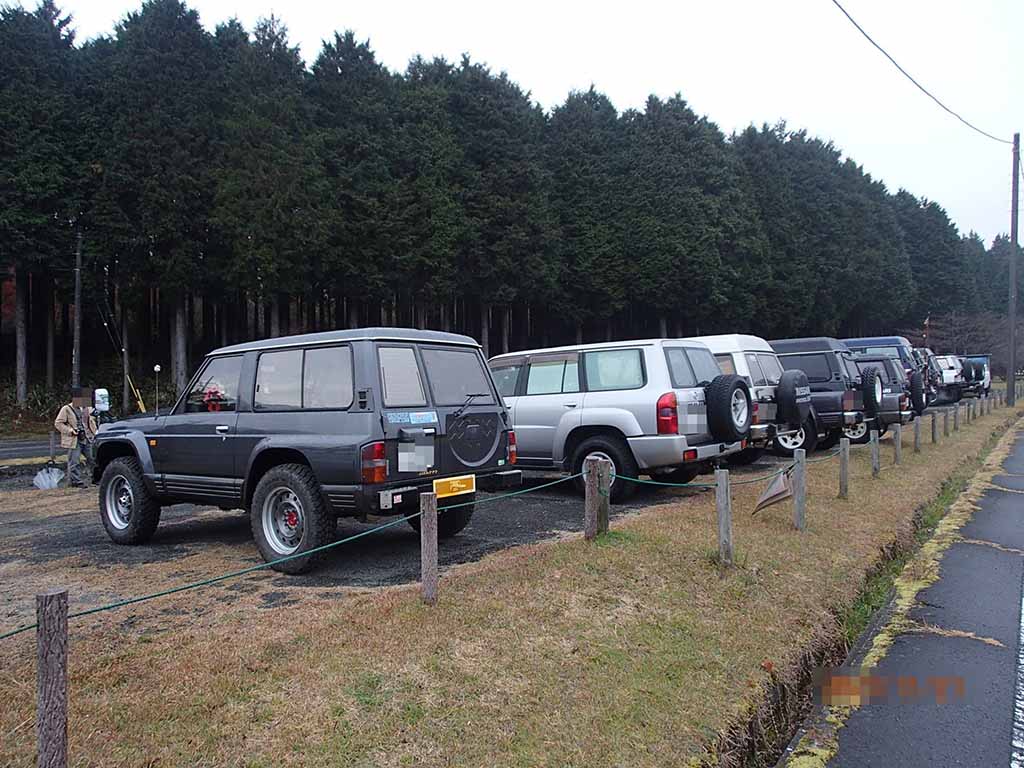 A flat out herd. Must have been 15 vehicles, many of them real classics in fine shape, some were highly modified and looking well-nigh unstoppable off road, some had travelled down here all the way from Hokkaido in the north of Japan. The Nissan Safari, Nissan Terrano, and Nissan Patrol were all there.

There were a couple of really treasured Safaris. The paint was in such good condition that you could see yourself in reflection. Look at the rain beading on this excellent paint: 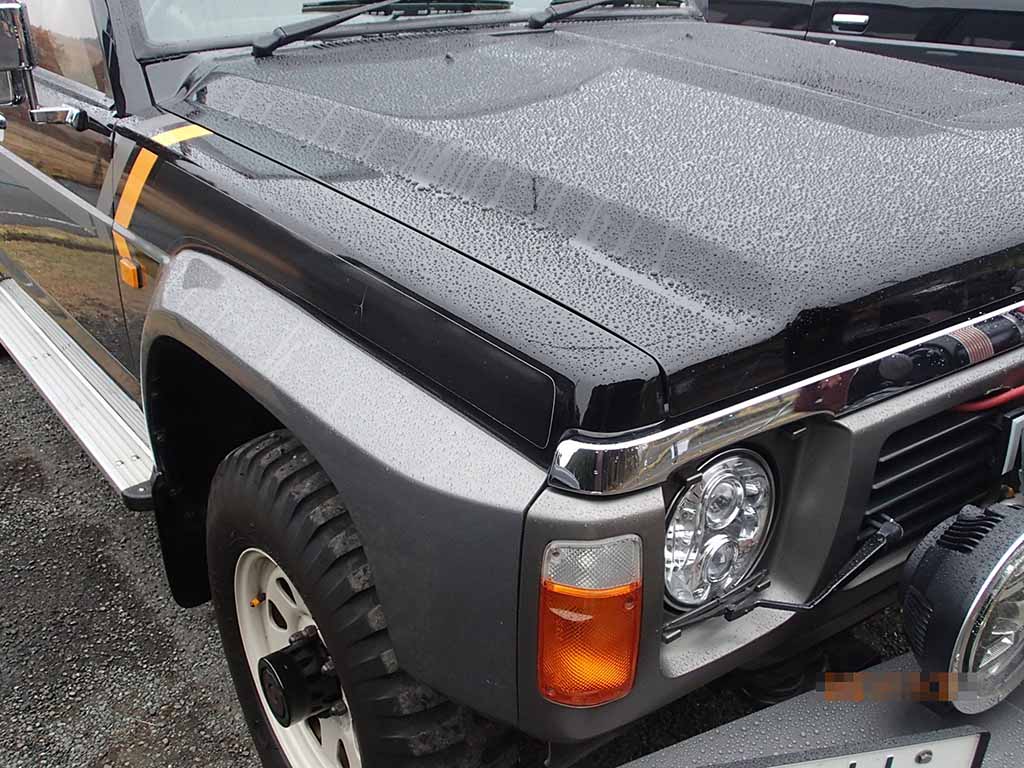 What a classic 4X4! The owner was even running the old style chunky tires that you might only see on army vehicles today: 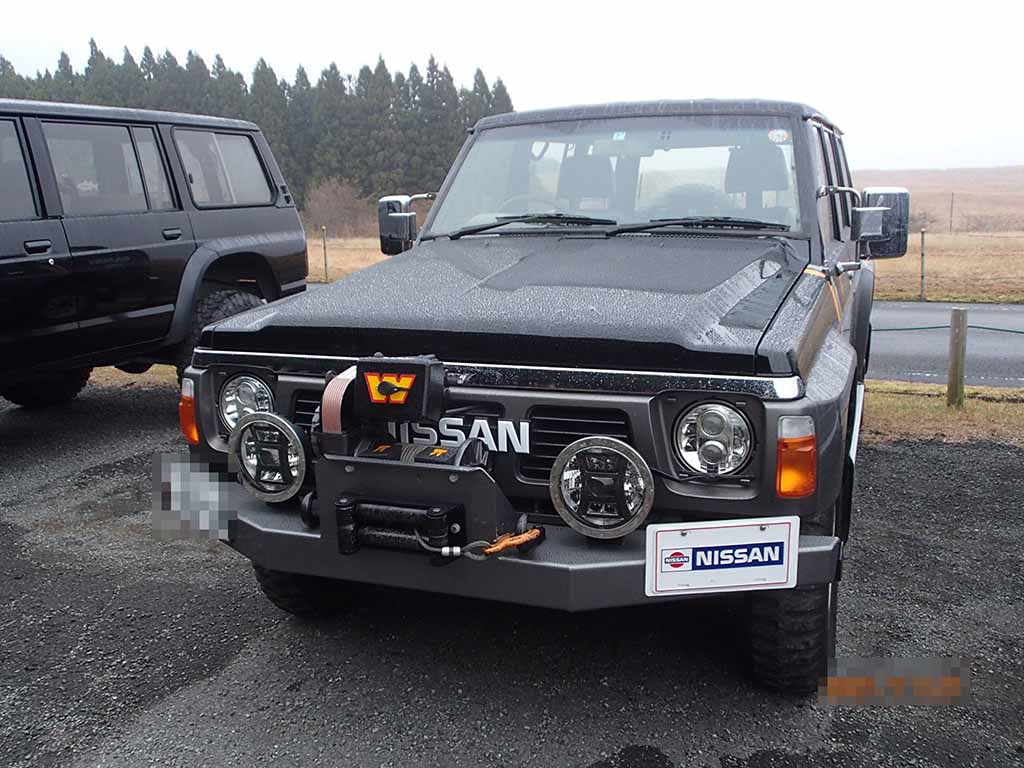 You don’t want to drive fast in the rain on a hard surface road with that rubber! But it’s classic, totally classic!

Another classic was this super clean and near stock Terrano; such a loved car 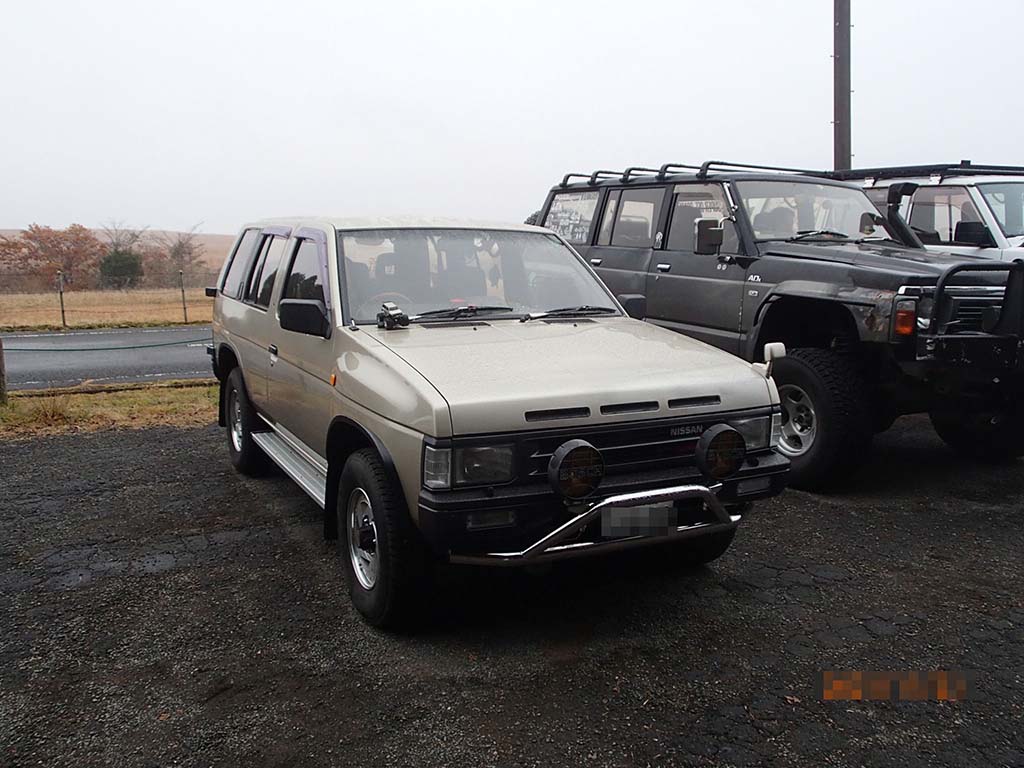 Also in the herd of Nissan four wheel drives there was this highly modified Terrano, one of the most modded 4X4s I’ve ever seen: 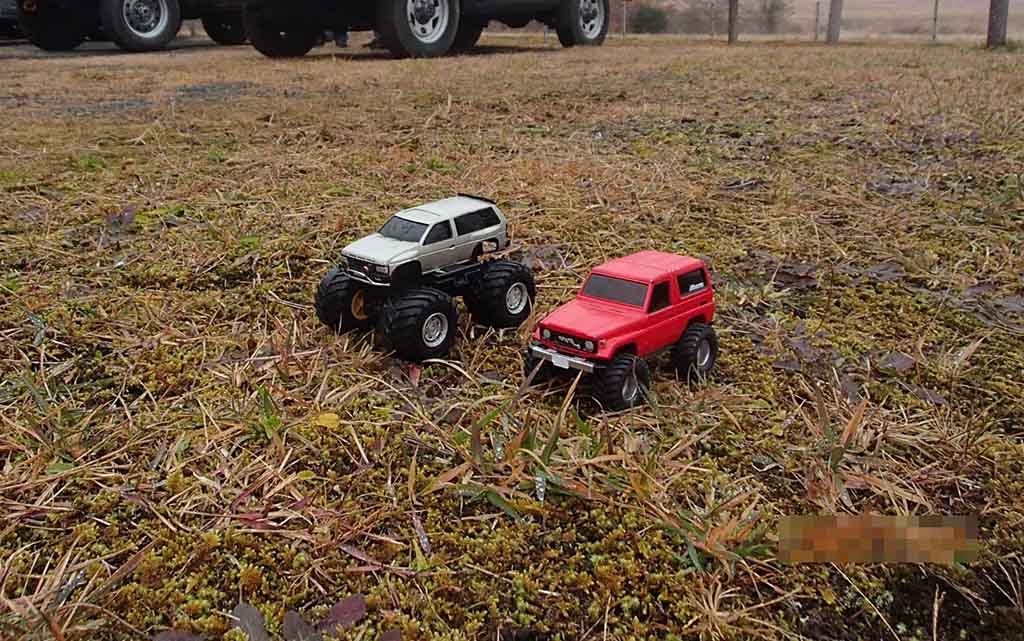 Do you think that this guy loves his car? 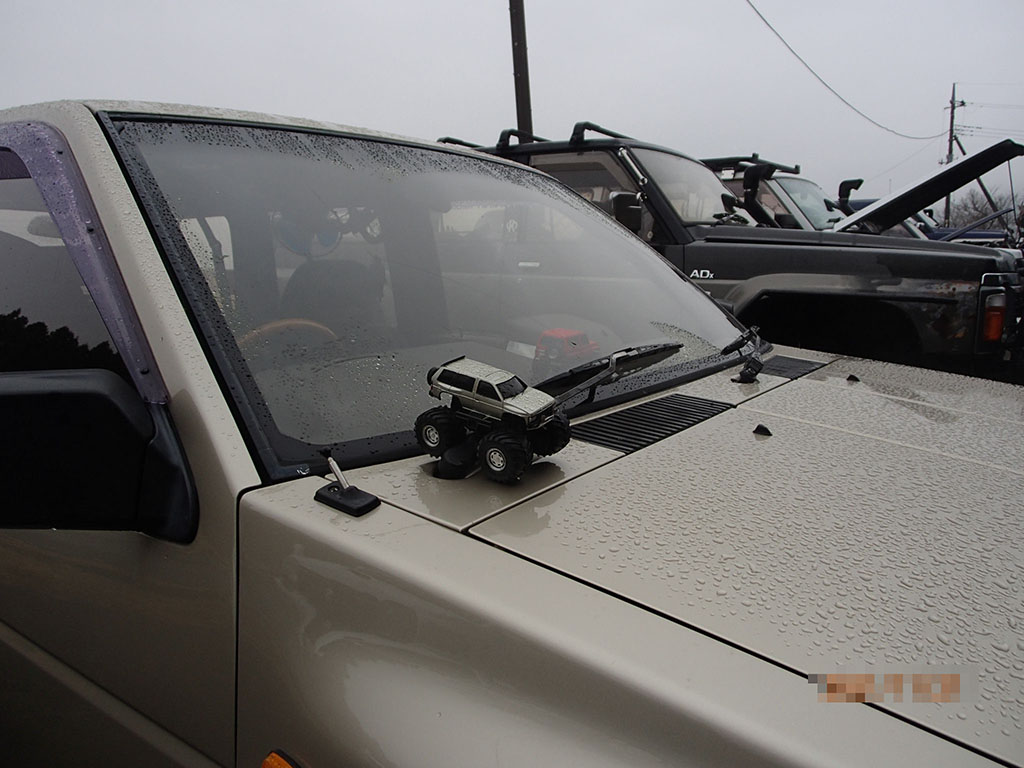 Those guys at the trailhead all loved their cars. And those big second hand Nissan 4X4s have got me thinking again about why, if you are looking for a used Japanese 4WD, it’s best to buy direct from Japan and ship the car back home rather than hacking around at the Main Street used car dealers, bracking your knuckles and getting burned in the (time consuming) process.

You see, many Japanese really like 4WD, but, for most of them, it’s a style, an accessory thing, not a mechanical, practical thing. Take my acquaintance, Taro, your typical “Taro Yamada.” (Not his real name.) There were 20 guys like him in the car manufacturing company here where I used to work. His love of 4WD goes like this: After he’s been a permanent employee for year or two he realizes that he can afford a real proper 4WD machine, so he buys something like a Nissan Safari (or in the case of our Toyota Group company, a Toyota Land Cruiser). 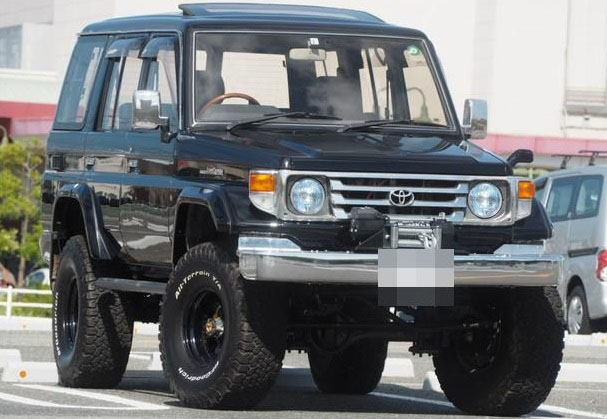 Taro keeps his rig in great condition and washes it every weekend. Enjoys it for three months just as it is and then he gets into mods: paint jobs, fancy nobby tyres, suspension lift kits (the higher the better), bull bars, winches, jacks, shovels, auxiliary gas cans, and so on. He ends up with something like this Nissan Safari Granroad: 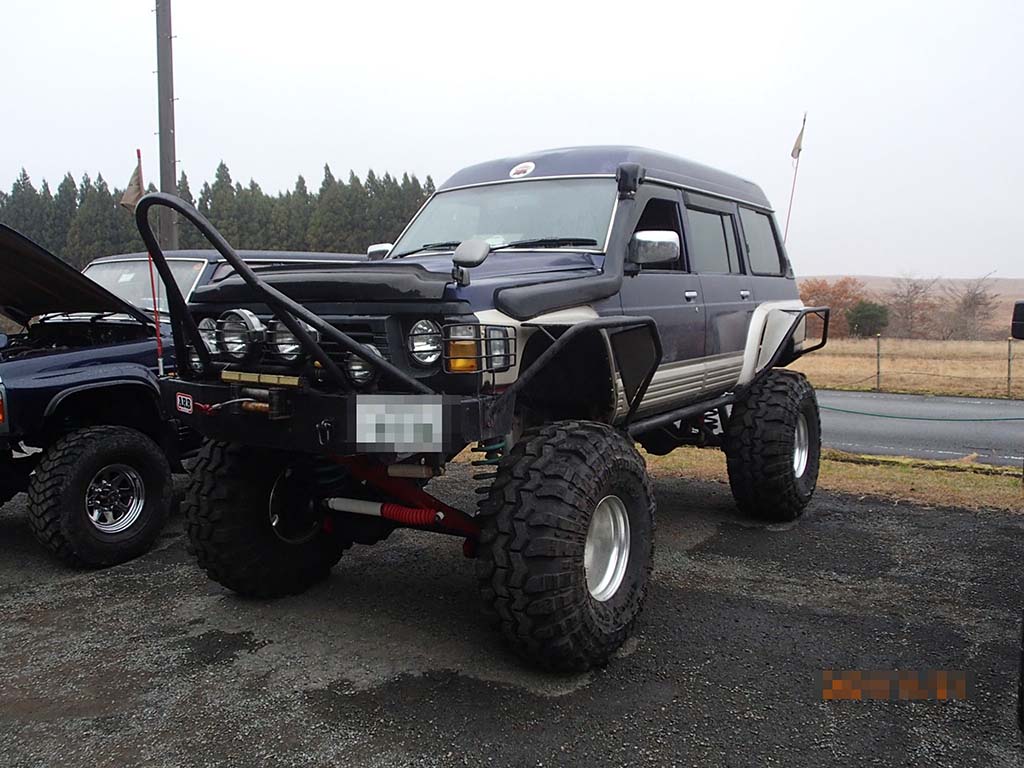 He spends pots of Yen on it, keeps it garaged, and…..rarely takes the thing off road!

But then his interests change: He discovers sports cars or motor bikes or just gets married and his life situation changes and…..bye-bye 4X4. I worked in the company there with a bunch of guys like that. There was a guy there who was super big time into surfing. Bought and tricked out a fancy Toyota Hi-Ace van for his boards and his beach life. Did it for a few years and then sold everything and got into horse racing: betting on horses, not riding them. When I asked him why he packed in the surfing life, he just said: “My interests changed.” Wow! Way to go, Taro! (He was single at the time, of course.)

And who gets these nice, rarely off-roaded off-road cars? Our smart customers at Japan Car Direct do.

Here’s another pic of that spectacular, highly modified Nissan Safari Granroad that was there at the trailhead that day: 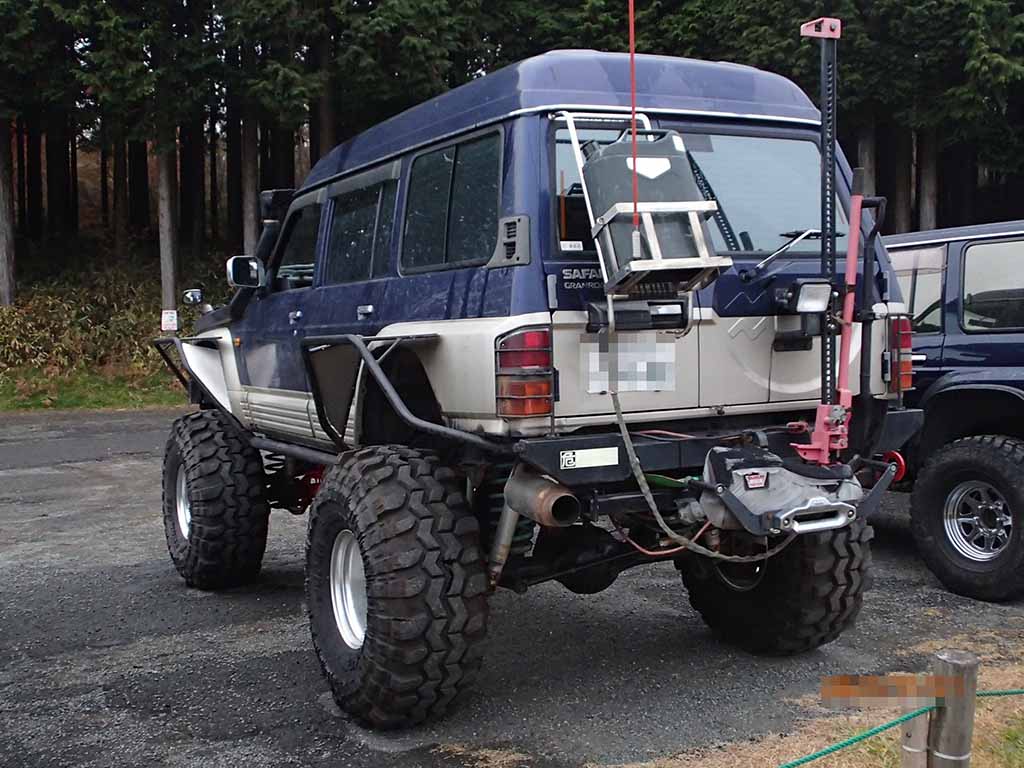 Yes, you’re seeing it right, he’s even got a winch on the back, too. He will never get stuck anywhere.

There were just so many mods and aftermarket treats there that day. Bull bars? You’ve already seen that big beast bull bar in the Safari photo above. Snorkels? Got ’em: 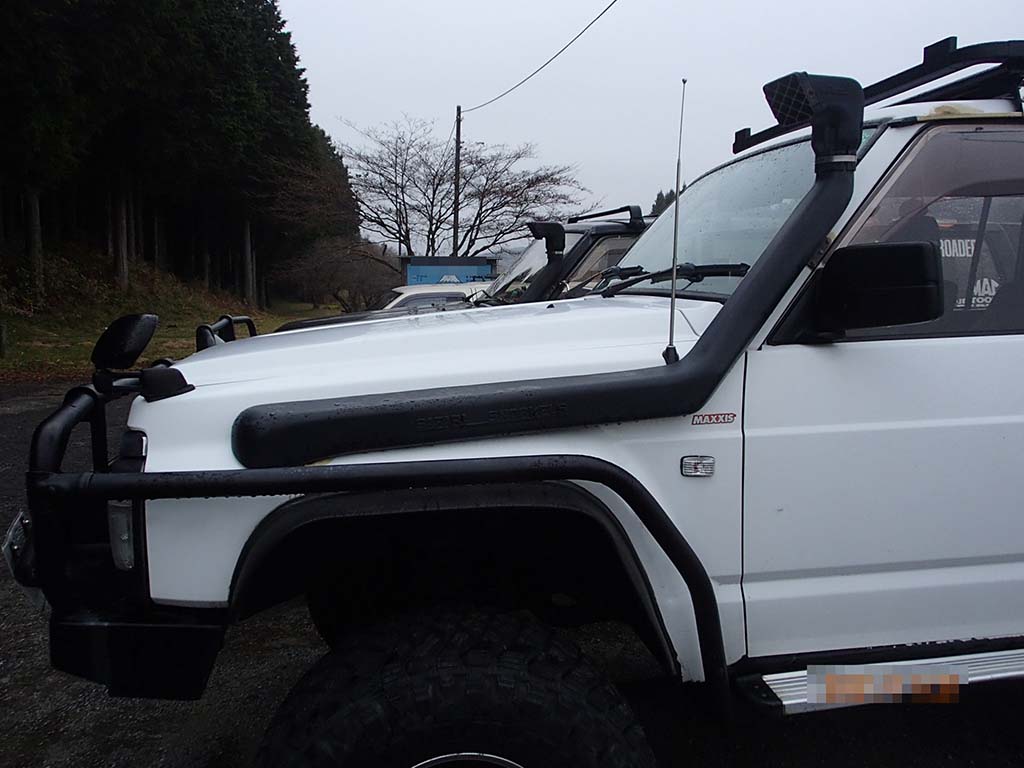 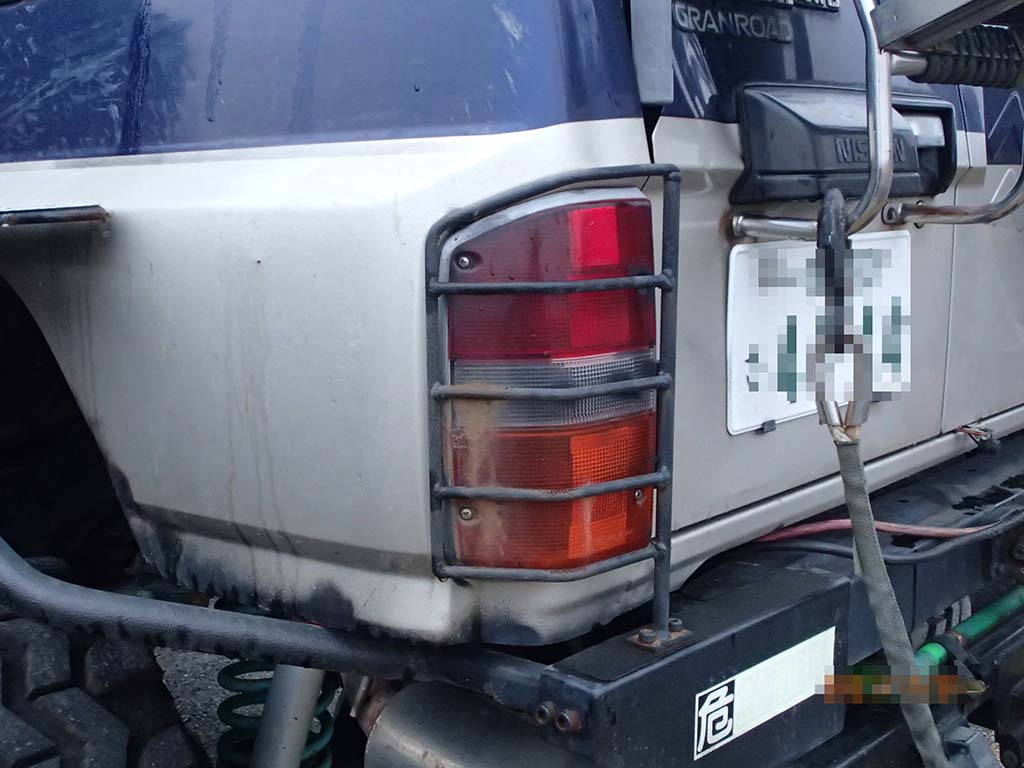 Steel tube flared fender guards that you can climb on? Got them, too.

When I think of buying a second hand 4WD car here in Japan, and I’ve done it four times so far, I classify the potential used cars I look at into four categories: 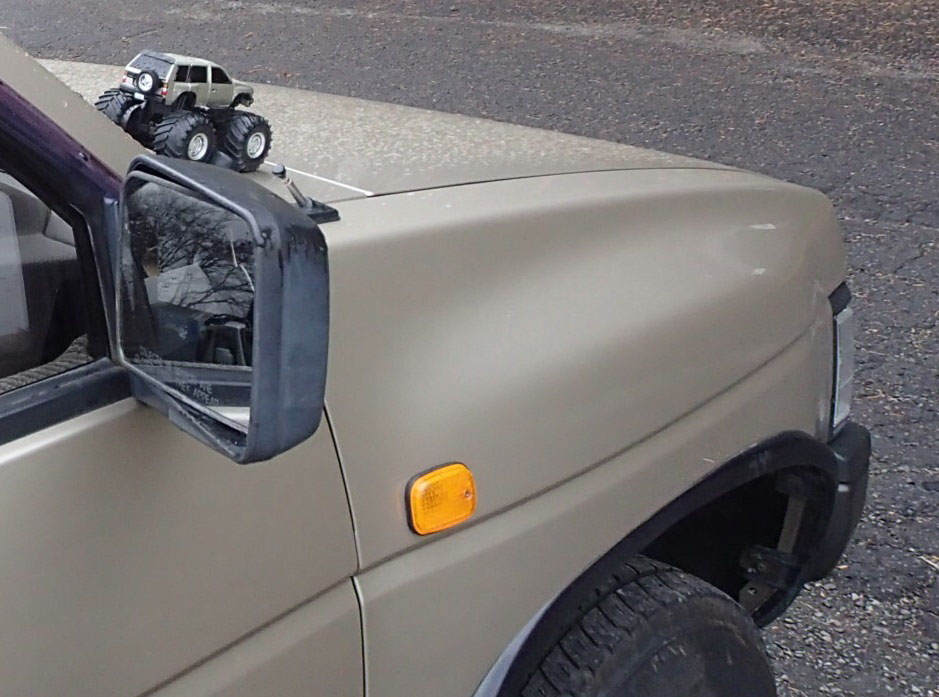 Since I do actually need off road capability for some of the trails up here on the mountain, and since I also need serious snowy mountain road survivability (at least half a dozen times a year), I don’t touch the seriously or monster modded categories. But if you yourself are looking for a seriously-modded used Japanese 4X4, there are many fine ones that come up at the Japanese used car auctions and at the Japanese used car dealers, and we get good units from both these sources. It can be very cost effective to buy a four wheel drive car that has already been modified, if modifications are what you want. I, myself have always gone bone stock or slightly modified. I had some really good mods on my old Suzuki Jimny SJ10, especially the power mods that are really necessary when you are working with those old, and frankly, underpowered, two-stroke engines. 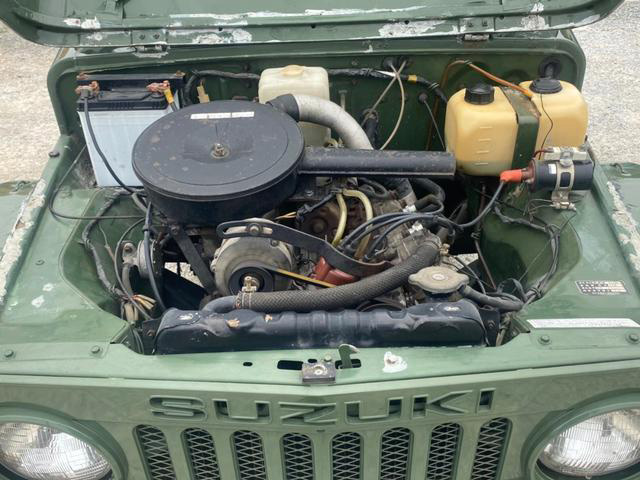 Now, a word of caution is called for when we are dealing with used, highly modified Suzuki Jimnys. What I said above about most big, highly modified four wheel drives in Japan rarely going off road does not hold true for the Jimnys. You see, in Japan, the main off-road trails are all in the hills and are very narrow. You are not going to be taking a Nissan Safari or a Toyota Land Cruiser on 90% of those trails. But you can, very much can, take a Jimny there; and those guys who mod their Jimnys to the nines do take them out there and do, sometimes, bash them up, or at least make their rigs sweat. And the Jimny off-road racers? Don’t touch their cars. 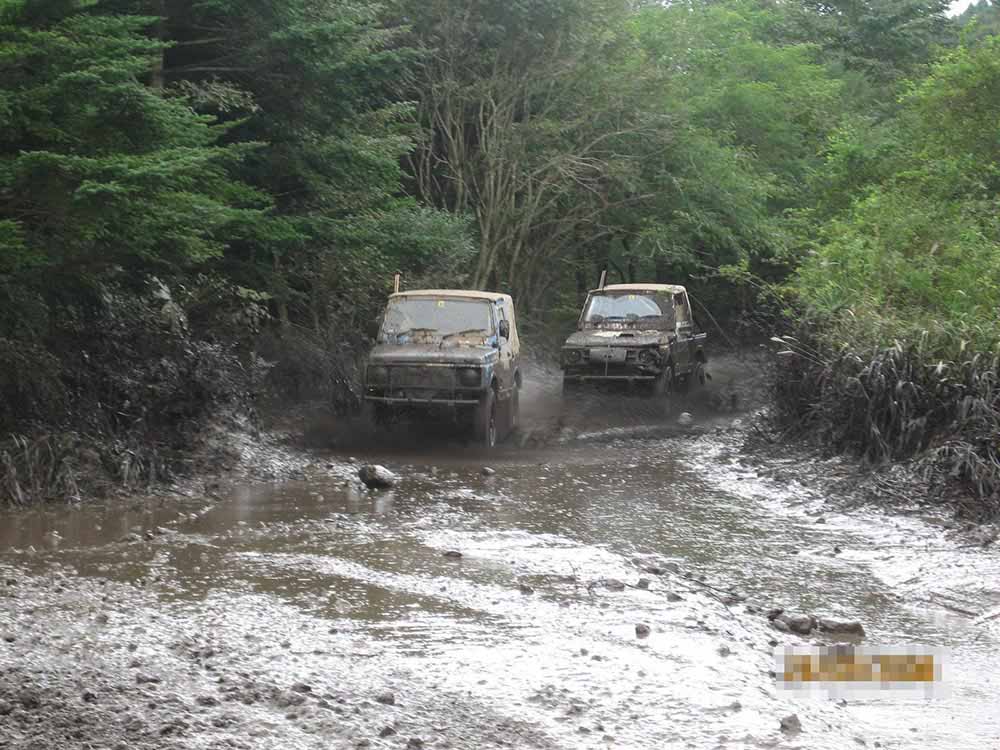 I’m always reasonable off-road. I like to have fun, yes, but I’m always sensible and never bash up my rig. I’ve seen guys in off-road races busting springs and crushing shocks. Me?….No. I don’t baby my 4X4s, it’s just that I don’t abuse them. (And, no, I’ve never won an off road race. I came third in an off-road time attack, though, and that must count for something.)

So, when looking at buying a seriously modified second hand Jimny from Japan, be sure that the car has not done any silly, super rough off road work. Our Japan Car Direct inspectors can give you an indication of cars to avoid in this respect. But there are lots of clean and beautiful “poser” Jimnys out there that have never been out in the rough, and they can be a good deal if you want a pre-modded unit. 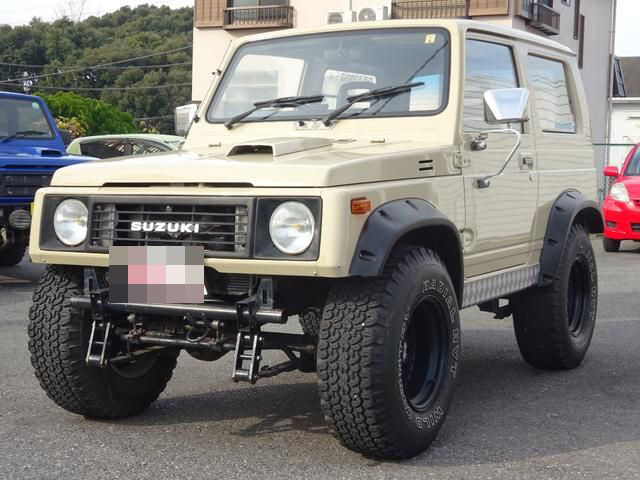 Speaking of Jimnys, there were one or two non-Nissan four wheel drives at the trail head that day, a couple of “outliers,” and one was a nice white JB23 Jimny with a sensible body lift and extra under frame protection. A good looking little unit: 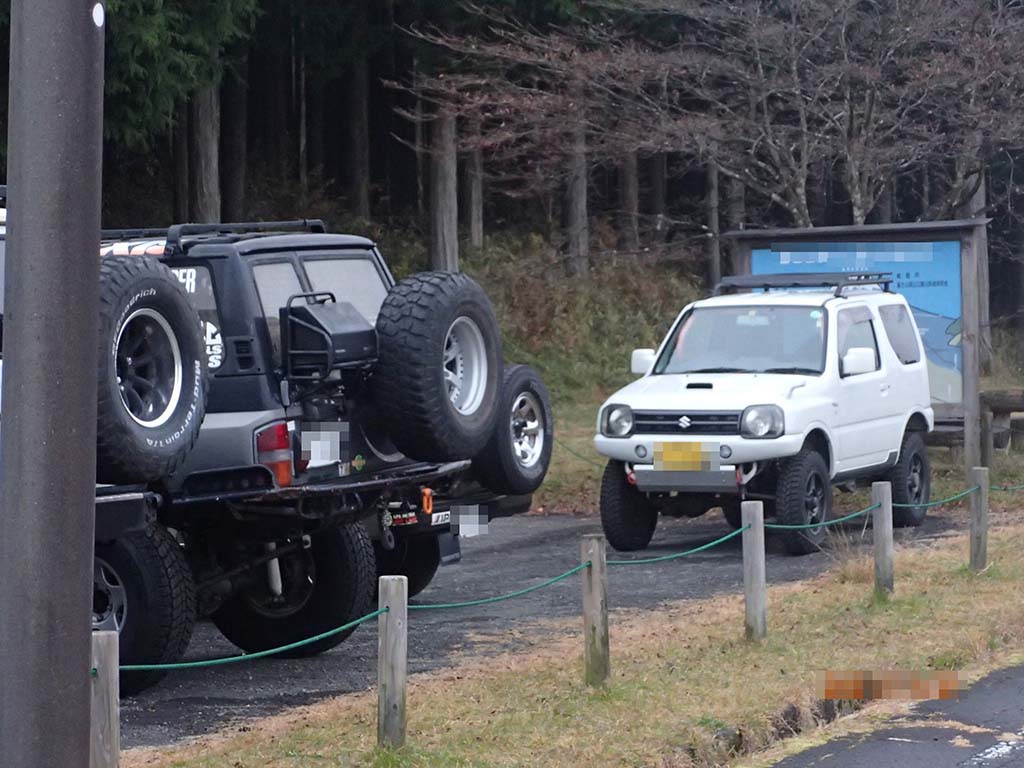 To find out more about used Suzuki Jimnys, have a look at the Jimny page on our main site, here.

The other outlier at the trailhead meet was my friend’s old Isuzu Trooper.

What a tough old goat! Goes for ever. My friend also lives up here on Mount Fuji, and so needs 4X4 capability. He’s a great fan of old 4WD cars. Drives them, deals in them, blogs about them, too. You can see his pics of the Nissan 4X4 herd at the trailhead on his blog here. (And, yes, the dog is my dog.)

Go Old Now, While You Can

He and I and the other off roaders were talking about older and newer four wheel drives and an important point came up in our conversation. It’s something that anyone thinking of buying a 4WD needs to keep in mind.

The basic problem you are facing these days (time of writing: December, 2021) if you buy a brand new four-wheel-drive car is that it is excessively complex. Bells and whistles to the nines, features, options, auto this and self-adjusting that. These things all cost money and they all break down. Every system on a car is a potential locus of failure; the more systems there are on your 4WD vehicle, the more chances that something breaks down and leaves you stuck “out there”. 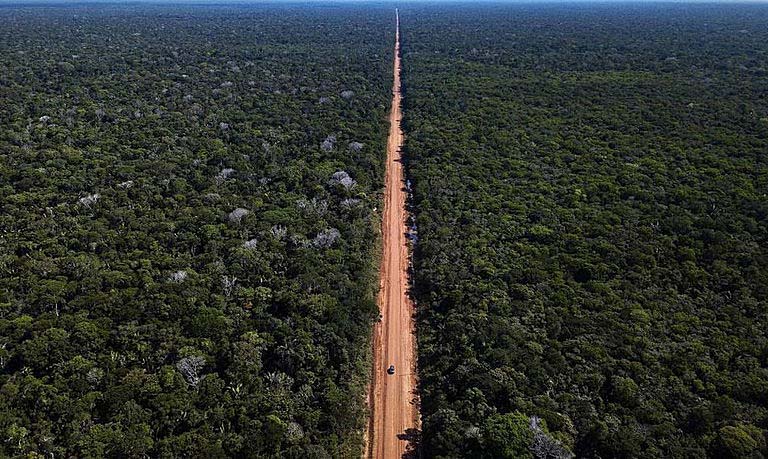 You don’t want that. So stay simple or you might find you’re staying out in the boonies longer than you’d planned.

Simple 4X4s will likely never come back, and the good old simple ones, especially the good used Japanese units from the 1990s, like your Safaris and Land Cruisers, are going up in price because the smart guys, our Japan Car Direct Winnermen (click here) are grabbing them now and shipping them from Japan to countries like our main Japan used car export destination such as the USA, Canada, the UK, Australia, and New Zealand. (To find out the used car import rules for these countries, just click on the country name.)

These are all good ’90s used Japanese four wheel drives.

Shooting the breeze there at the trailhead in the drizzly mountain air, the general conclusion was: “Yep, go old and come back home.” (And I, myself, would add: “Go bone stock or reasonably modded.” That’s my two cents.)

So if you want to buy a clean, used, reliable 4WD from Japan, just register here and we’ll help you find the rig that will always get you there and back again.