Some people say that there are no “aspirational vehicles” any more. No cars that a serious motoring enthusiast can really aspire to, really want. No cars that, when you see one drive past you on the road, make you say: “I want that car! I gotta have one!” 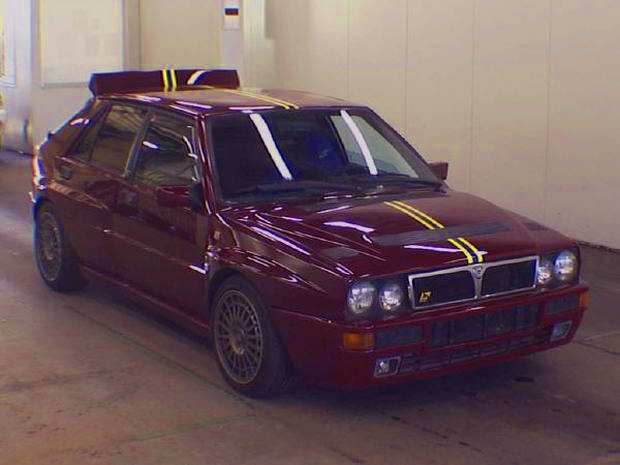 Yeah, I guess it’s true in a way. And certainly for me, when I look at most modern cars, with their regulated, semi-egg-shaped bodies, their narrow, darkly tinted side and rear windows, and their meaningless body panel press lines, I don’t feel myself really wanting, strongly wanting, what the car makers are offering me today.

But when I see a nice clean Lancia Delta Integrale drive by me on the roads here in Japan (and I see more than just a few, especially when I go to Fuji Speedway or the classic car meet at Atami every year.), I definitely think: “I want that! I want an Integrale!”

I’ve been privileged to have had a number of excellent sports and performance cars, and I’m at that point now in my motoring career when I’m getting pretty picky about what car I’d go for next; but certainly the Delta Integrale turns my crank.

The Lancia Delta Integrale, and especially the 16v and the Evoluzione and Evoluzione-II (and the late ‘80s Delta HF and the Integrale 8v, too) really caught on in Japan, and they come up for sale now pretty consistently at the specialist used car dealers here and even at the Japanese used car auctions. Their popularity with Japanese sports car fans is no surprise, of course, since the ten-time WRC rally champion (and eleven times the winner at Monte Carlo) has the handling, braking, and power characteristics that make it a natural to conquer Japan’s twisty mountain roads while ensuring that you can pass and stay ahead of the pack on the highways here, too. And the Integrale’s all-wheel-drive system (56 percent of torque to the front wheels, 44 to the rear for the HF, changed to 47/53 front/rear for the 16v, unlike my Celica GT-4 with its 50/50 split) means that a snowy mountain road does not mean that the fun has come to an end.

And the AWD system on an Integrale guarantees that all that turbo power which the 2-liter straight-four engine is pumping out (like 212hp at a nice 5,750/rpm for an Evo-2) goes right to the road with no wheel slip or traction limitation; so you’re getting solid 0-60 times of well under six seconds with a 16v, an Evoluzione, or an Evoluzione-II

And the car is essentially compact, being based as it is on Giugiaro’s original Lancia Delta, a compact car with engine sizes ranging from 1.1 to 1.6 liters. So these cars are not road hogs; and, for what you are getting (AWD, turbo, reinforced chassis, etc.) they are not particularly heavy. A Delta HF Integrale 16v comes in at 1,300kgs kerb weight. My GT-4 was 1,380kgs and felt heavy sometimes, but my Impreza WRX STi, Version-3 weighed the same as an Integrale 16v and it felt noticeably lighter than the Celica. (Of course, it wasn’t just the lack of those 80kgs that made the difference, the Impreza had a better suspension system, and the Delta Integrale is even better still.)

But you are getting more. The Lancia Delta Integrale has something else; something that maybe, with all the rules and regulations limiting car designs now, we are never going to have again with more modern cars: The Delta has style. Indeed, it has been called a styling icon. And it is. It catches your eye. The look of it squeezes your chest with the desire to have it. Just looking at it, you feel the time of the car, the spirit of the car (the spirit of fun and achievement), and you feel the joy of performance driving just in the visual impression the cars makes. A Delta 16v, with its wider wheel flared fenders, and the bulge in the hood to give space to the 16-valve head, doesn’t just “have” style, it “is” style. Few cars give you all this.

But still we are not done with the Delta Integrale. Oh, no, no. We’re not done yet, and you’ll see why I’m thinking seriously about getting and Integrale in Japan.

You see, because the Lancia Delta is not a modern design, it can have large rear and side windows to give you good outward visibility. And you don’t have to have factory tinted windows. This is essential for safe driving, especially in low-light conditions (dusk and early morning) and at night. It you are going to drive fast and furious, which is what a Delta Integrale is for, you need to know who else and what else is on the road. If you can’t see it, you’re not going to know it’s there. As a practical reality of sports motoring, good visibility is essential.

Of course, the specs on any Delta Integrale are not, most emphatically not, what you would normally associate with a “practical” car:

For the HF Integrale 8v, you are looking at 0-60 times in the mid six seconds, with the engine putting out 185ps at a nice, low 5,300rpm. This power is bumped up in the HF Integrale 16v to 200ps at 5,500rpm, and 0-60 acceleration time drops to the mid five seconds. Power keeps climbing in the later HF Integrale Evoluzione (now 210ps at 5,750rpm), and in the final version, the HF Integrale Evoluzione 2, power hits 215ps at the same 5,750rpm. The zero to sixty miles per hour times of these later two cars are the same as the HF Integrale 16v, but, from what I understand, the feel of the power curve is different: The 16v has a smaller, somewhat more responsive turbo, whereas the Evo-II turbo boost comes on harder. (I’d guess that the difference in power curve and boost feel is going to feel like the difference between my Impreza STi and my Celica GT-4.)

Now I will admit that, with some vehicles, the owning and the having are more important than the driving. This happens when you are buying a classic or high-value-retention car for your own personal wealth protection. Cars like the Lancia Delta Integrale do fall into this category because, since they are established collector’s cars, they can be expected to retain their value well into the future.

So, yes, as an investment only, and driving aside, a nice clean, low-kilometers low-miles Delta Integrale like this really beautiful 1994 HF Integrale Evoluzione-II here (with only 49,500km on it!): 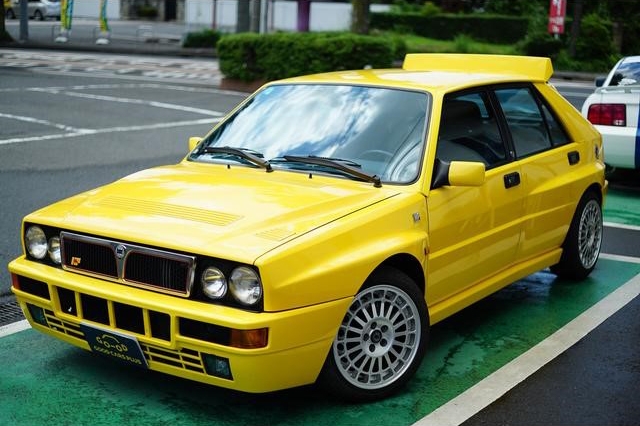 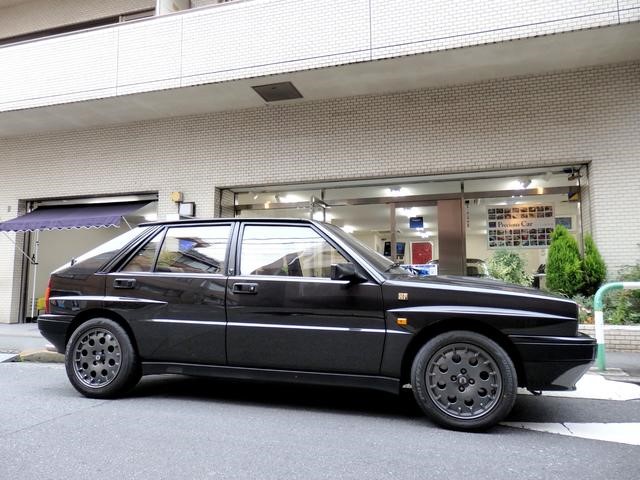 make good sense, and both are available in Japan now (I’m writing this in February, 2019) for export to the UK, America, Taiwan, France and other EU countries.

And this is where again, and always, in used car buying overall condition is crucial. In Europe, in Britain, cars like the Lancia Delta Integrale often lead hard lives and buying a used Integrale in the land of its birth, in Italy, does not make wise purchasing sense. But buying a used Delta Integrale from Japan does make sense. It makes very good sense. As I mentioned earlier, when I see an Integrale here on the roads is Japan, be it a 16v or an Evoluzione or an Evoluzione-II or even the rarer and older HF it is, almost invariably, in very good condition.

The Japanese owners of Delta Integrales baby their cars. Sure, they drive them, but they sure do not abuse them. The fellow in Japan who, at present, owns the Intergrale that you are going to buy, has treated that car as his treasure, his baby. When you buy a second hand Lancia Delta Integrale from Japan, you benefit from all that loving care the car has been receiving here. And you benefit as well from the fact that the climate here is generally kind to cars: mild and, except in certain northern areas (from which we do not purchase cars for our customers for export), no salt is used on the roads.

So I’m looking around in Japan for a nice used Delta Integrale, and I’m seeing cars like the two beauties above, or these two really nice 1992 HF Integrale Evoluzione units here with their eye-catching hood bulges (all for sale now, February, 2019): 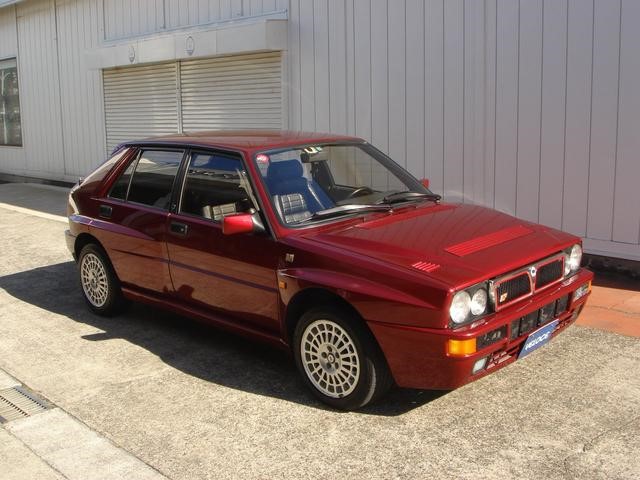 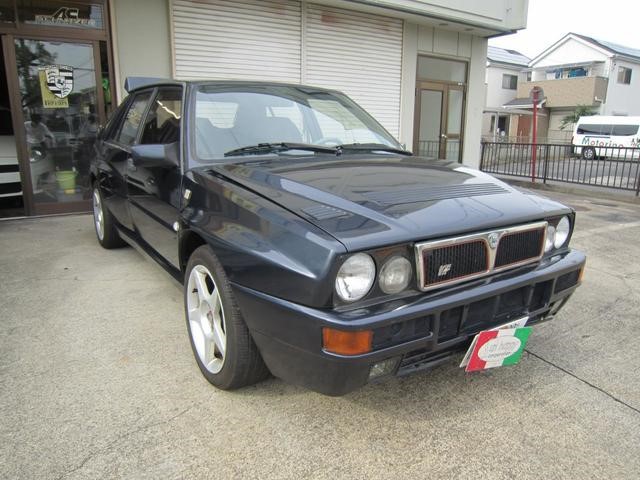 And as I get on in life, I can at least say that I am not struggling financially anymore and finally a Lancia Delta Integrale is coming within my grasp. But in no way is an Integrale a rich man’s only car. They are going for reasonable prices now in Japan these days. But, yes, these days prices are climbing as more and more buyers realize that Japan is the best place to source a good example for export to the USA, to England, to the European Union, or to Taiwan, and to other countries as well. And guys, let’s be realistic, prices for good Delta Integrales are not going to be going down anytime soon, maybe never. For me, I’m thinking that I can go for one now, but in three to five years, prices may be getting beyond me. I kind of feel like I’m in a race against time to go for buying a second-hand Integrale now, or maybe be too late as they all get snapped up in Japan and exported out of the country. (To my own customers, so I’m happy about that, of course; but I still want an Integrale for myself, too.)

But putting me and my desires aside; for you, for someone who wants to export a good used Delta Integrale from Japan, you won’t make a mistake by doing so now via us here at Japan Car Direct. We’ll help you find a good unit and arrange the inspection and the necessary export documentation and the shipping. That’s the service we provide, like we did for our customer who bought this really fine 1995 Delta Integrale Evoluzione Due.

That happy customer, and our other satisfied customers who have exported clean used Lancia Delta Integrales direct from Japan, definitely found the car that they aspire to. The car that they really want.

Those interested in possessing Japan’s most exclusive used automobile, or any other used Japanese or European luxury model, are encouraged to consider the huge and affordable Japanese used car market and give Japan Car Direct a call.