Many Japanese love escaping the city crowds to explore the countryside in recreational vehicles. According to the Japan Recreational Vehicle Association, there are currently about 100,400 RVs in Japan and the used RV market is booming.

At Japan Car Direct, we’ve noticed that more and more people around the world are discovering the appeal of used Japanese RVs and importing them from Japan countries like the US, Canada and the UK.

Used Japanese RVs offer remarkable reliability at low prices. They also squeeze maximum utility into minimum space and maximum power from minimal fuel to deliver a whole lot of pleasure, performance, fuel efficiency and practicality. While smaller than many RVs in the west, they let you travel and relax in home-like comfort without worrying about narrow roads or small parking spaces. Their smaller size also allows them to be shipped at standard freight rates.

There are lots of used Japanese RV models to choose from at used car auctions and used car dealers in Japan. Many of these vehicles are in great condition with moderate mileage even from the 1980s and early 1990s, which means you can legally import them to your home country at low cost — even the United States with its strict 25-year rule.

The following are some great examples of used Japanese RVs that Japan Car Direct recently purchased and exported to lucky RV lovers abroad.

The Mitsubishi Delica camper is great for sightseeing and camping. It has a sleeping area above the cab, a table with sofas that convert to a bed, another long sofa that extends to create another bed, a shower room with built-in toilet, a practical kitchen with cabinets, a handy stove and refrigerator. You could live pretty comfortably in one of these. Power is provided, on Delica campers, by a 3.0 V6 gasoline or 2.8 turbo-diesel engine, both of which generate more than enough torque and horsepower to take this lightweight vehicle up steep mountain roads. 2WD, 4WD and models with a 2-foot longer wheelbase are available. 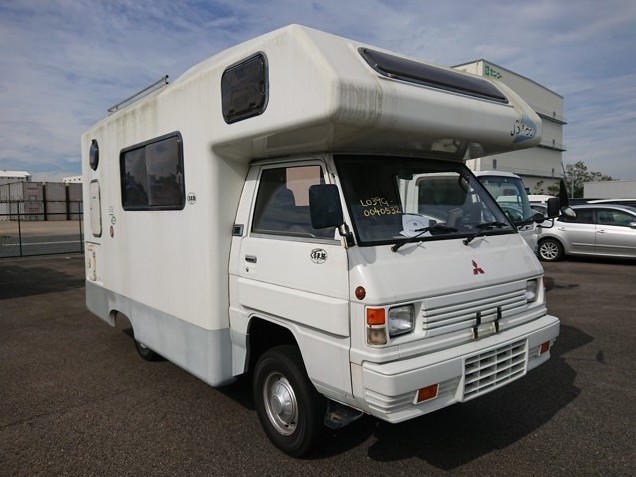 It’s hard to beat the reliability of a Toyota. While slightly smaller than the other RVs in this article, this 1992 Toyota Town Ace camper van offers many of the same great features. You can pop up the rooftop tent to create a more open atmosphere in the daytime, and convert the area to a bed at night that comfortably sleeps one adult or two children. The potent 2.0 liter gasoline engine under the cabin has only 87,000 km on the odometer, and four wheel drive takes you wherever you want to go with confidence. When parts need replacing, you can find them just about anywhere because many parts are shared with the Toyota Hilux. 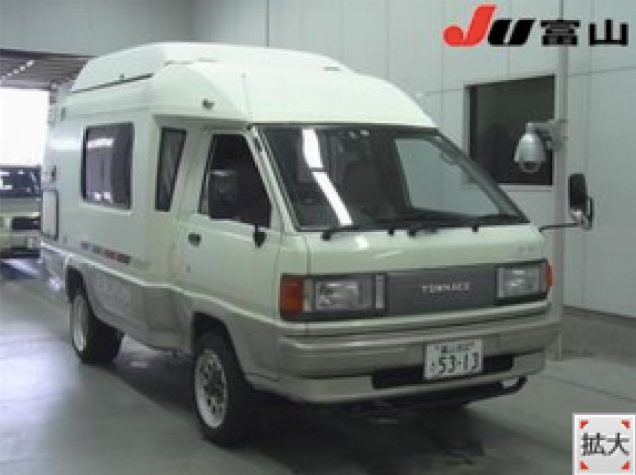 The name Elf Camp makes you wonder just how small this vehicle is, but it’s the same size as most other Japanese campers and carries up to 10 people. The big space-efficient interior features a table and two sofas that fold up to make a bed, sleeping quarters above the cab, plenty of storage cupboards and counter space, a stove, sink, refrigerator, shower and toilet — everything you need to enjoy comfortable journeys and fun camping trips. 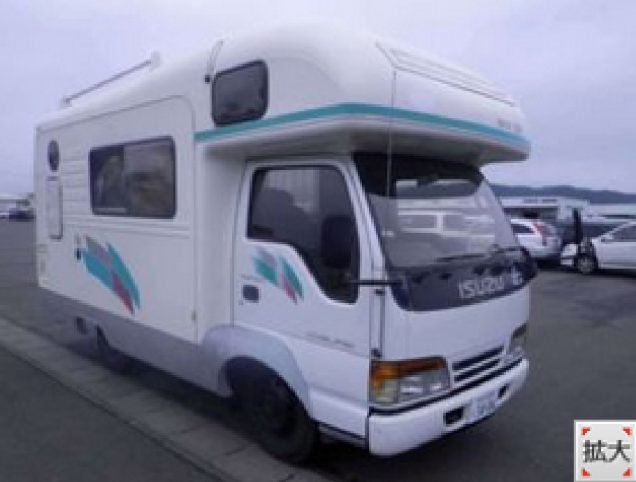 And Get Away From It All: Choose the Right Used Camper for You

The campers we’ve got here on this page are just a fraction of what is available now for direct import from Japan. The Isuzu Elf based camper and the Mitsubishi Delica based camper above show you what the bigger units are like and are often referred to as “motor homes.” The Toyota Town Ace Camper Van is an example of the full on van conversion. If you look in at our Japan Car Direct blog here you’ll get a feel for the differences between the motor home and the van conversion.

Clearly the motor home has it all over the van conversion in terms of interior space for seating and storage; but the van wins in terms of drivability: easier to park, less tippy on corners, and lower total external vehicle height. These points can really make a van conversion much easier to live with on the road, but it’s true that the motor home is easier to live in: you’re not always banging your head on the ceiling or stooping over, as is typically the case when you’re moving around inside a camper van.

With the exception of a toilet and larger dining table, the converted camper vans, at least what you can think of as the “full on camper van conversions,” are not far behind your motor homes in conveniences and luxuries. But this is definitely not the case with the more modest camper van conversion jobs, the sort of “budget conversions.” These guys are much more Spartan in terms of conveniences and luxuries. But, and there’s always a “but” in nearly every aspect of motor vehicle design, the budget van conversions tend to give you more storage space and, sometimes, more actual sleeping room as your fold down beds and bunks have more space to expand into with the simple interior of the budget units.

You really have to take your time and think about these differences in what you can expect from each “class” of camper, be it motor home, full on van conversion, or budget van conversion. Know what each of these categories of camper will generally give you, and then think, sit down and really think, and visualize, how you see yourself using the camper that you want to import from Japan. Once you are settled on your needs, you’ll be able to find the right used camper here in Japan that will fit your visions and dreams of “living on wheels.”

Better yet, do what I did once and rent one. Because I did that, I know now that I myself, if I decide to buy a camper here in Japan, would tend to go for the van conversion. I’d rather have the drivability that comes from the more compact external dimensions of the camper van conversion as compared to the motor home body style. And the van types are (a bit) less exposed to cross winds on the highway at speed. Also, in Japan, we have lots of highway service areas with various facilities and, compared to the USA or Australia or Canada (BIG country) we just don’t drive as far on our holidays here, so I’m willing to do without a toilet. If I were buying a used camper here to use back home in Canada, the decision, for me, in favor of the camper van, would not be so easy. A private, clean toilet sure is nice to have in a camper on a long, long trip.

Now, one of the great things about looking in the Japanese used car market (be it at the used car auctions or at the used car dealers, and we source good vehicles from both) for your camper car is that, in Japan, we have a nice little special niche camper: the Kei van (Japanese minivan) based camper. We talk about them over on our blog here and they are really wonderful little jewels! Sure, they don’t give you the luxuries and features of motor homes, but they are super compact, cheap to run and maintain, and just seem to go forever, like the Kei trucks on which they are ultimately based. Depending on interior layout, you can get nice sleeping for two, sufficient storage for food and camp goods, and even an awning mounted on the left or right side of the van body. Pull out that awning, unfold the camp chairs and table, set up the stove, and you are there; you have arrived. Perfect motor camping for the two of you.

And it if rains, just fold and store the gear (let the stove cool down first!), set up the bed, jump in and……..pull out a good book. 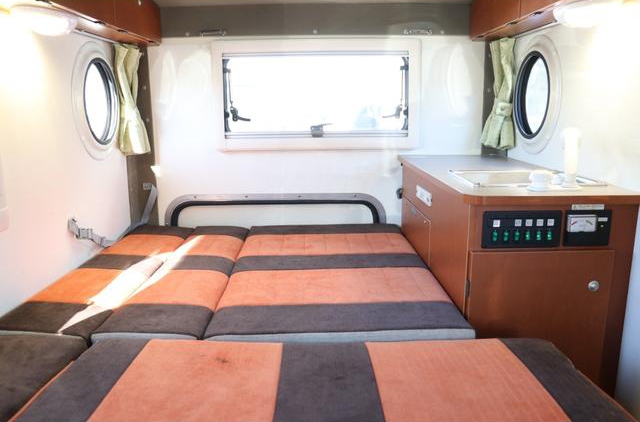 Whether you are looking to cruise the coastline or climb mountains, travel with small or large groups there are Japanese campers to fit your needs. And with a little imagination and modification, you can customize them to make them a perfect fit for you. The Japan Car Direct team has personally owned and enjoy a variety of campers. Choose us to find the best one for you.