The first time I drove an Audi TT (it was a first generation, 8N type) was the first time, in fact, that I drove any Audi at all. I had the privilege of driving it on the track in the UK. In Canada, when I was a boy, Audi was not a common marque. When it came to German cars it was Volkswagen at the bottom end and Mercedes Benz at the top with BMW hot on their heels. The Audi TT and its sub types, like the very clean TTS that we are looking at here, whether with the straight four motor, the straight five, or the 3.2 liter narrow angle V6 engine (an amazing design that I’ll tell you a bit about later), all are popular here in Japan and I see many good condition examples on the roads these days. These beautiful cars went into production in 1998 and are still being made. This second gen here, the 8J type (2006-2014), is a super clean used Audi that we sourced from the Japanese used car auctions and he’s a good example of the well-cared for used German cars that we have here in Japan. 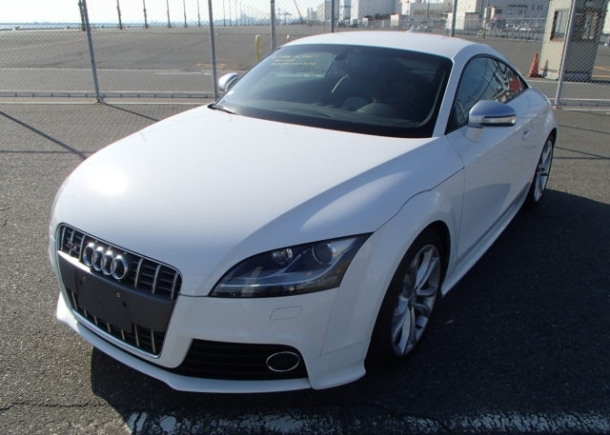 Since these cars are so popular here, if you want to import a used Audi TT direct from Japan, you are going to have many fine units to choose from, whether found at the Japanese used car auctions or at the used car dealers; and at Japan Car Direct we source from both. Japan is definitely a good hunting ground for a used TT.

I Get Some Track Time in an Audi TT

Zooming around the track in that 8N type was quite something. The car was front wheel drive and the handling was very good. It also had an electronic stability program and, when I pushed it too far in the corners, I could actually feel the car selectively applying the brakes so that I did not, in my enthusiasm, fly off the track and into the tyre barricades. Good idea.

Now on the same track with a Honda DC2 type Integra, 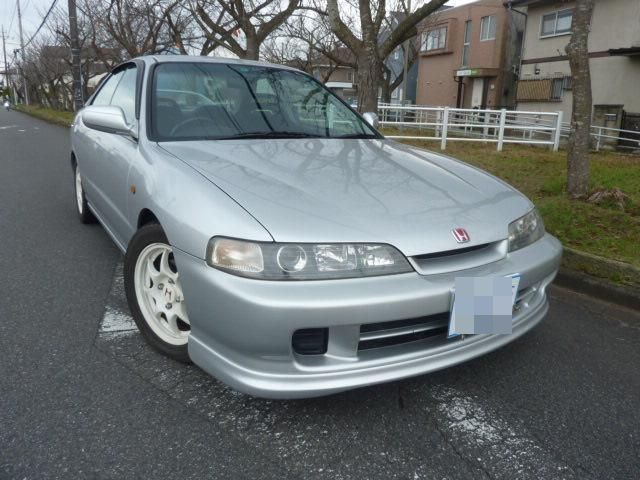 on the tightest corners, I felt that the DC2 cornered even tighter than the TT, but at corner exit onto a broad straight, the TT had it on the Honda because, although it was the heavier car (1,300kg for the TT vs about 1,050kg for the DC2) the turbo charged Audi 1.8 had gobs more low end torque than the super high revving, but still normally aspirated, Honda 1.8.

That weight figure is also a clue as to the true nature of the Audi TT: It’s a sports car crossing over (well over in the case of the all wheel drive TTS here) into being a supercar. The Audi TT is fairly short fore and aft, but it’s wide left to right. Seeing the car from a distance on the roads it doesn’t look big, and it’ not, but, when you walk right up to a TT, you realize that it is beefy and has a fair amount of heft to it.

It also has a visual impact that is best appreciated up close. It’s a group of delightful curves that play off each other and complement each other without melding together into some sort of jelly bean shape. No, the curves all remain distinct but complementary. There’s the rounded front end leading the eye to the balanced arch of the roof flowing into the compact rear end. Nothing over hanging, nothing in the way. The four wheel arches also sport finely sculpted, but understated, curves that complement the three main front, middle, and rear volumes. It’s a happy visual symphony and very pleasing to the eye.

Did I have any complaints about the TT? Yeah, just a bit. Rear three quarter view over my right shoulder (remember, I was driving British side) was not that great. That beautiful body with its gorgeous curves meant that the rear pillars sometimes obstructed my view. BUT: The rear window is actually quite wide and tall and so direct reward visibility was good. No complaints about that.

Turning more now to this beautiful, clean, white second gen Audi TT that we exported recently from Japan: This car is quite above what I drove on the track back in the UK. This car is the Audi TTS. A very potent piece of sports car / supercar kit.

Look first at the engine: 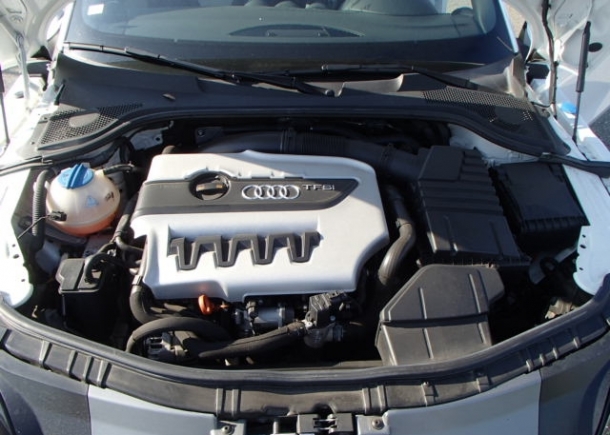 You’ll see “TFSI” in the engine cover. This unit is a more powerful version of the turbo four that was in “my” Audi TT that day on the track. Various modifications put power way up to over 270ps, with torque at over 35kgm; but still coming in nice and low at 2,500rpm, which is something I liked about the TT I drove.

Now, with the Audi TTS, all that power is not going only through the front wheels; a recipe for mechanical frustration, to be sure. Spinning your FF wheels in a powerful car as you put the pedal down from a standing start and weight shifts to the rear and off the drive wheels is not, how shall we say, “mechanically ideal.” Nope. But with the Audi TTS the power goes to the road via all four wheels using Audi’s signature “Quattro” all wheel drive system. Of course, the first thing you’ll think is “now we can get some serious 0-60 times,” and you’ll be right; less than five and a half, Gents.

But there’s more. One of the guys here at Japan Car Direct noted a further key benefit of this system and he put it this way: The AWD Audi TTS has “power-on corner exit that can’t be beat even by a mid-engined, two-wheel-drive car.” I second this from my own experience with my midship MR2 vs my front engine AWD Celica GT-Four. When coming out of a corner I could come on the power in a serious way in the GT-Four and notably earlier than I could in my MR2 and still feel confident that I was not going to “kiss lamppost.” (Have a peek here at this beautiful black 1994 GT-Four that we shipped to Australia.)

Weird and Wonderful and Narrow

Now we’ve been talking here only about the four cylinder Audi TT / TTS, but I mentioned above that there is a six cylinder version of the car. These 3.2 liter machines were in production until 2010 in both the 8N type and the 8J type, and they come up fairly regularly in the used car market here in Japan.

Now the engine, although classed as a V6, actually has only ONE cylinder head. The engine designers at the Volkswagen / Audi Group achieved this by making the angle between the two banks of cylinders very close, as this graphic from Wikipedia shows: 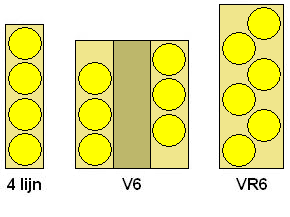 Pretty neat, eh? And only two camshafts required! For all you petrol heads out there, have a look at Wikipedia’s good article here where the whole, very elegant, concept is explained more fully. (Just so neat! It’s like six cylinders for the price of four.)

Good Condition Audis and Other German Cars from Japan

You’ll have noted from the pictures of our TTS here that the car is clean and in very good shape. This is pretty well the case with all of your second hand Audis and other high end German cars bought in Japan. The owners really treasure these machines, these “Wundercars,” and maintain them well and treat them right. Look at some of the very fine used German cars that we have recently exported from Japan, just click on the car name:

And, interestingly, we have exported quite a number of good used German cars back to Germany (you’ll find the German import regulations on our website here) and to other EU countries, especially Poland (and you’ll find the Polish import rules here).

And Not “Back Home” Only.

And it’s not only back home to Germany and Europe that these good used Audis and Benzes and BMWs are going. Many of our major buyers of used German high end and collectable cars are in the USA, and if it’s a used German car from Japan that is 25 years old or older (which is nothing for quality German iron!), it is easy to import to America. (Click here to see the US import regs.)

So, Guys, register here to get the ball rolling and here at JCD we will help you find and import a nice good used German car from Japan, like the Audi TT and TTS. Lovely machines and just so good looking. I’m going to put up another photo of one just because it is so good looking! Here you are: 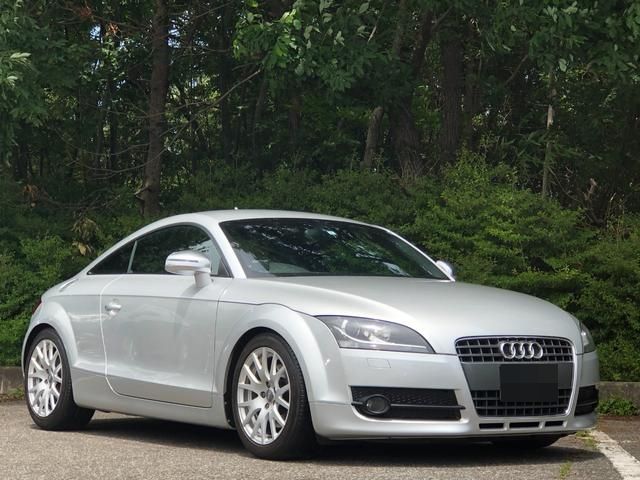