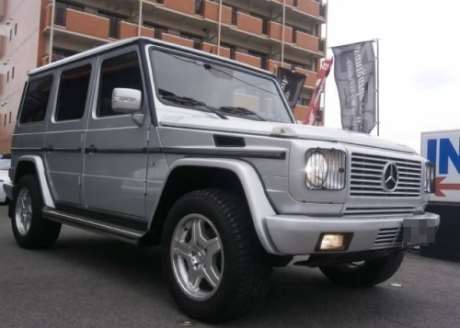 The Mercedes Benz G-Class, short for Gelandewagen, is a 4wd luxury SUV produced by Mercedes Benz since 1979. Although the vehicle has been in production for over 40 years, it is very similar to the Porsche 911, in that very few design changes have been made over the extremely long production run with the current models looking just as boxy as the ones produced 40 years ago. Over the years, the G-Class has been offered with gasoline engines as small as 2 liters and diesels from 2.4 liters to the monster 6.0 liter twin-turbo V12 gasoline engine and the 4.0 liter V8 diesel engine. Some of the original models came with a manual transmission, however, all models from the 463 starting in 1990 came with automatic transmissions. With features such as differential lock and traction control, the G-class is capable and designed to carrying all of your passengers and their luggage over any terrain to any destination. However, at a starting price of well over $120,000 USD, they are more suited towards carrying affluent families or clients around town. Here is one example that we exported : Mercedes Benz G500