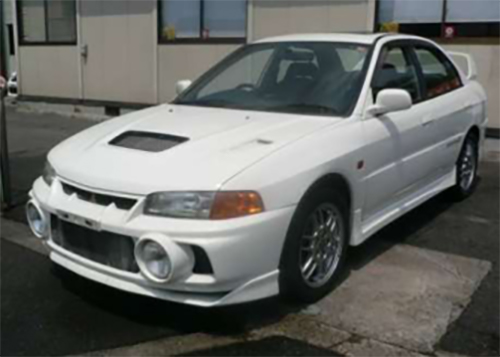 Few cars in the “very quick” class give you more bang for the buck than a 1990s Mitsubishi’s Lancer Evo. And very tuneable, too.

Incredible power and handling, courtesy of 280 turbocharged horses and road-gripping AWD, combine with very reasonable prices to make the Evo an all-time favorite among serious enthusiasts on a budget. It’s one of the many sought after used vehicles available in Japan to smart shoppers around the world.

This particular JDM Evo model is from the fourth generation (1996-1998), the last generation that was only sold in Japan. Compact and sporty, with a twin-turbocharged 2.0-liter inline four, it can’t be imported to the United States yet. But we can export one just like it to Lancer Evo fanatics in various other countries around the world.

Americans can already import first through third generation models produced earlier in the 1990s that are just as fantastic. Whichever Lancer Evolution model you seek, we can help you find it in excellent condition for import to your home country at a much better price than your local dealers can offer.

Friends driving Lancer Evos and Impreza WRX Stis are always comparing their relative advantages, which I see as largely a matter of taste, but nobody can deny the incredible performance and value of Mitsubishi Lancer Evos. There are plenty of more comfortable and practical cars around, but very few deliver such exhilaration so affordably. Many hardcore enthusiasts and professional rally drivers settle for nothing less and if you’ve never heard the exhaust note of a Lancer Evo, you’re in for a treat.

Awhile back, we had the fortune of sourcing one of the greatest Lancer Evos of all time — a JDM 2000 Lancer RS Evo VI — and shipping it to an ecstatic customer abroad. Not only did it come from probably the best generation ever, but it delivered all the raw stripped-down insanity of an RS.

If you’ve caught the Lancer Evo bug, don’t torture yourself any longer. Make one yours by importing it from Japan with the assistance of Japan Car Direct.