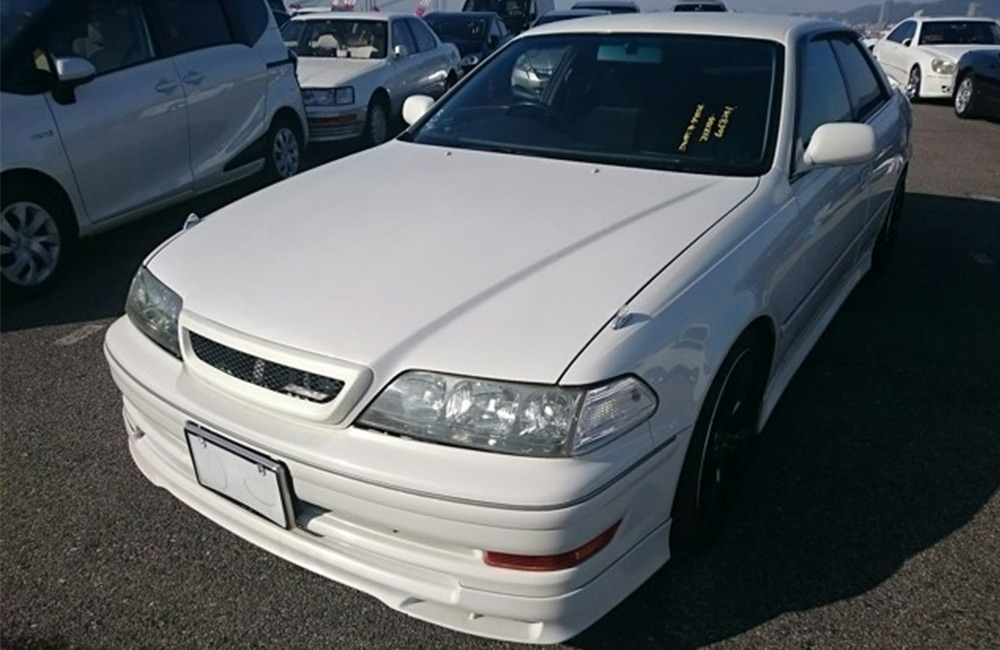 There is so much happening now in the world of direct car export from Japan, especially when it comes to performance and sporting machines like drift cars, that we are going to use our blog here at Japan Car Direct to tell you more about it.

The first one that I’ve got to tell you about is the Toyota Mark-II. We just exported this very handsome, very tough-looking (and truly tough, in fact, since these JZX-100 chassis Toyotas are among the strongest-built cars in the drift car class), white Mark-II Tourer-V to the UK. The classic Japanese turbo-muscle car lines of the Tourer-V say loud and clear “This car has power. This car IS power.”

And that power, that full on turbo power that makes the Mark-2 and its sister cars, the Toyota Cresta and the Toyota Chaser (a well-known ruler of the drift circuit) so fantastic and thrilling, comes from one of Toyota’s best ever, strongest ever engines: The 1JZ-GTE, iron-block, straight six. You will not beat this engine for power and sheer tough build in the Japanese drift car class. (I know, I know, the fans of the Nissan RB26DETT in the Skyline GT-R, and the Nissan RB25DET in the Skyline 25GT are going to call me out on this, but, having known two guys that blew turbo RB series engines on the track after doing tuning work on those units (…..ahem….O.K. maybe they did a bit of over boosting), I just have the impression that the Toyota JZ series are the stronger engines. I’m being subjective, I know.)

And, for drift cars in “The Heavies” class (see our reference article here ) you won’t beat the rock solid chassis that you are getting in a Toyota Chaser, Cresta, or Mark-II, or Cressida; and I mean the JZX-80, JZX-90, JZX-100, and the JZX-110 chassis.

Equal them, maybe, but not beat them.

Let me go on a bit about these Toyota chassis number codes for the Japanese turbo drift cars that you can export directly from Japan yourself (via an exporter like us here at Japan Car Direct). The thing to keep in mind here is which chassis are available now, or will soon be available under the used car import rules and regulations of your country. I’m going to focus here on importing a secondhand Japanese drift car to the USA, to the UK, and to Canada.

With a used drift car imported directly to the USA, the car must be 25 years old, or older, and that gives us access to the JZX-90 chassis of the turbo Mark-2, Chaser, and Cresta; all with the engine we want: That 1JZ-GTE, 2.5 liter, twin turbo, straight six that I think is so great. Now these JZX-90 chassis cars were in production from 1992 to 1996 and we are scoring good units here in Japan at the used car auctions and at the secondhand car dealers that we partner with. So, for example, a 1993 Toyota Chaser Tourer-V, with the twin-turbo 1JZ-GTE, can be imported to America fairly easily now under the 25-year rule. Import a nice one of these, or a Cresta Tourer-V, and you are laughing all the way to your local drift track and back home again. And again and again, as these tough Japanese drift machines will give you many miles and many days of thrilling sports motoring and joyful high power cruising.

Also available for importing from Japan to the USA in the heavy drift car class is the JZX-80 chassis type, that ran from 1989 to 1992. At this point the Chasers and Crestas with the twin-turbo 1JZ-GTE were labeled: Chaser-GT and Cresta-GT. When I see these units now at the drift course at Fuji Speedway, they usually sport big after market single turbos. With importing a used Japanese drift car to Canada, if the car is 15 years old or older, you can import it yourself directly and we’ll help you with that, and with finding a good unit here in Japan. So, for import to Canada, in addition to the JZX-80 and JZX-90 chassis Crestas and Chasers and Mark-2s, you also have access to the newer JZX-100 chassis cars, and….and….and (drum roll, please, Gentlemen) you can import the final version of these Toyota turbo drift monsters: The Mark-II iR-V, with the JZX-110 chassis. (I’ll have a bit more to say about one of these cars later in this post.)

Now, for you guys in Quebec, the situation for importing a used drift car from Japan is a little different in that, if the vehicle is right hand drive (RHD), it must be 25 years old or older. So that puts you in the same situation as drift car maniacs in the States: You’ve got easy import access to the JZX-80 and JZX-90 chassis cars. Serious machines and drift track dominators, and no doubt about that.

When it comes to drift cars for import to the UK, the situation is even more favorable: If the secondhand car being imported from Japan is 10 years old, or older, it is easier to MOT and the whole process is just that much better.

So, for the guys in the UK who are into drift cars and seriously want to do their own import directly from Japan, they’ve got access to the whole range of Toyota’s turbo drift car Heavies: The Chaser, the Cresta, the Mark-2, the JZX-80, JZX-90, JZX-100, and the final, latest Mark-2 iR-V vehicles, with the JZX-110 chassis.

Now, I’ve got to say something about the impression that these cars make on me, and not only as drift cars bombing around the track at Fuji Speedway, roaring and howling and spraying us spectators with rubber chips, but about the impression they make on me personally, as machines on the street here in Japan; like on a quiet night last week in the parking lot at the gym. Parked there under the lights, beside my humble Mazda Roadster, was a beautiful, clean, late-series Mark-II iR-V, in Black Mica, sporting wide track, after-market wheels in dark ash metallic. The car had a strong, quiet presence. Handsome. Not oversized, but muscular. This car says: “serious.”

Unlike with many turbo performance cars, there is no intercooler intake scoop on top of the bonnet. No power bulge. It’s like a strong gentleman in a dark suit, white shirt, dark, conservative tie, who is quietly…..carrying. He’s using a shoulder holster, so there’s no hip bulge; but he’s packing heat. Serious heat, big caliber, like a Podbyrin 9.2mm automatic. But the heat these Toyota drift cars, these Chasers, these Crestas, these Mark-IIs are packing is that glorious 1JZ-GTE. Twin turbos, big intercooler (and easily bigger if you want to go aftermarket), iron block, and 38.5kg/m of torque at a very low 2,400rpm. And this is stock, guys, stock. These cars are pretty nearly drift masters right out of the box; no wonder they are so popular for modding and use on the drift track. And there are lots of aftermarket goodies to make your Japanese drift car even more of a rocket-blasting, rubber-burning thrill machine.

And speaking of goodies, with that Mark-2 Tourer-V that we recently exported to the UK, the white one I talked about earlier in this post, we had some nice goodies to send on together with that car on its trip from Japan to the UK. Have a look: A back up set of shocks: And, oh, what do we have here? Self explanatory, eh? Now, before we wrap things up on these excellent Toyota drift cars that you can export now from Japan, let me note here, especially for our customers who want to import a drift car to the UK, a bit of the confusing nomenclature that comes up with the final versions of the JZX-110 chassis cars: Don’t overlook the Toyota Verossa: And simply so uber-cool! Can you just imagine ripping away from a traffic light in one of these in grey-black or dark blue mica, body lowered, over-wide wheels on aftermarket, low-aspect tires? I sure can!

Maybe too beautiful to take to the drift track?

So, just to be clear about these sisters of the Mark-2, with the Verossa, you are looking for the VR25, NOT the V25. With the Mark-IIs, the turbo cars suitable for drift are called Mark-II iR-V or Mark-II Grande iR-V, NOT the iR-S or Grande iR-S.

The Mark-II iR-S and the Verossa V25 are the normally aspirated (NA) versions of these cars. Now, that’s not to say that you can’t drift in an NA car, of course you can, and some of the hottest drifters I’ve seen at the Speedway were running NA, especially on the light cars like the Toyota Levin and Trueno (AE-86 chassis). Take a look at this guy: This NA engine is a serious player in the drift car world.

But if you are going to do your drifting in the class that I call “The Heavies,” then the drift car that you export from Japan for that purpose should be a turbo like these Mark-2s, Verossas, Chasers, and Crestas that we have been talking about in this post.

As you get serious about doing this, about doing your own direct export of a drift vehicle from Japan, get in touch with us here at Japan Car Direct and we’ll set you up with a good drift car and the shipping and export and document assistance that you need to do it right.