A Package of Mods Saves a Pack of Money

Certain cars are a tuner’s dream. You get so much more in return for your work on them. The car, good as stock, becomes so much better when properly modified. You get a happy return on the money you spend, be it on parts or labor (and let’s be honest, mods aren’t cheap).

The Suzuki Jimny, and especially a JA11 (in production from March of 1990 to November of 1995), is definitely a tuner’s dream: You’ve got terrifically good availability of aftermarket parts for everything from suspension tuning to power tuning to vehicle protection to auxiliary meters to things that just make the car look good.

A Big Market in Aftermarket

Lift kits raise the Jimny and increase your ground clearance to help you over the nastier rocks and logs while you’re playing around in the outback or in the bush (although at the expense of increased tippiness in fast corners, never forget); various leaf spring options give you improved strength and road holding; hub spacers to increase track width give you better resistance to tipping off road (and on road); specially made steel plates work as under guards to protect the low points on your Jimny: the differential, the gear box, even the shackles, and of course and absolutely necessary, your gas tank. Word to the wise: Our JA11 (and SJ10) gas tanks are rear mounted, so let your first Jimny modification be a gas tank guard plate. I put a dent in the tank on my full canvas SJ10 and that put the fear into me. I sourced a used plate right quick, I’ll tell ya.

Look what our winner customer is getting on the underside of the Jimny he’s exporting from Japan now: 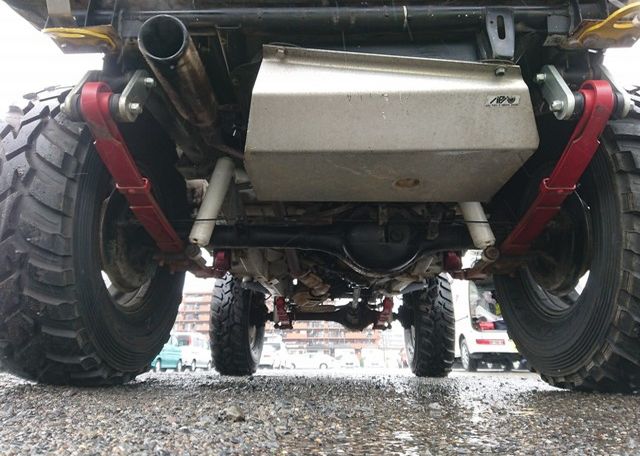 And there is so much more. Auxiliary meters tell you what turbo boost pressure you are running or what your oil pressure is. I had these on my 1990 JA11 (of course they wouldn’t make any sense on my two-stroke SJ10….duh!) and I thought that they looked cool into the bargain. I loved how they looked at night, especially.

You can get aftermarket seats that help you take the bumps and bangs better. You can even get dress up parts, like the chromed front grill on this Jimny that we’re looking at now, 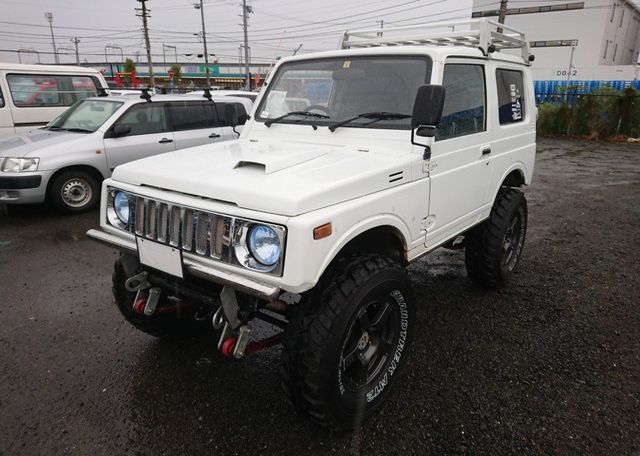 to make your JA11 look like a civilized car, which it is not. (But I guess that if you make it look civilized your girlfriend might be more willing to come for a ride with you in it, no? Or, better yet, if your girlfriend is herself not so civilized then forget dress up parts and you two can just jump in your Jimny and head out into the great unknown and leave civilization behind. Good road!)

Leave the Engine Till Last?

I can’t cover all the Jimny mods available in this short article here, of course, but I should mention that, when it comes to engine tuning with the F6A straight three engine that you’ll get in a JA11, the sky is the limit: Everything from crawler turbos to peak power turbos are available, along with high flow intercoolers, special CPUs, and full performance exhaust systems from header to tail pipe. These engines car be bored and stroked and there are kits available to bring a 660cc F6A up to 720cc. Boosting power from stock 58ps to 110-120ps (reliable) is achievable. And there are even a number of aftermarket blow-off valves that give you just the most wicked sounding “PAAFF!!” as you come off the throttle after pushing heavy boost. Totally cool!

Spend Your Money to Get the Most

And I haven’t even talked about limited slip differentials (LSDs), strengthened clutches, ultra wide tires, harder shocks, better plug wires and coils, even improved thermostats. The Jimny can have all these things.

But it’s gonna cost ya.

Unless you do what our customer did here by importing to the USA a Jimny that already has a good number of the most essential modifications and aftermarket parts already on it. Just look at the photos of this clean and well-maintained 1993 JA11. Note the mods from top (roof rack) as we see here: 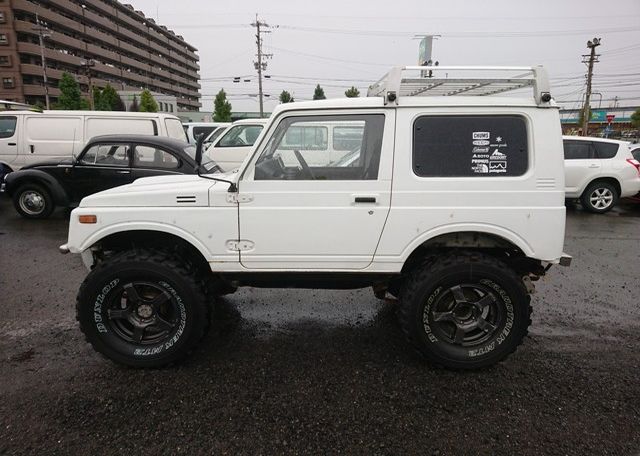 to bottom (tank guard, shocks, springs, shackles, and tow hooks) as we saw in the first photo above, to the interior (Recaro driver’s seat, sweet shift knobs, and even a cool cup holder!): 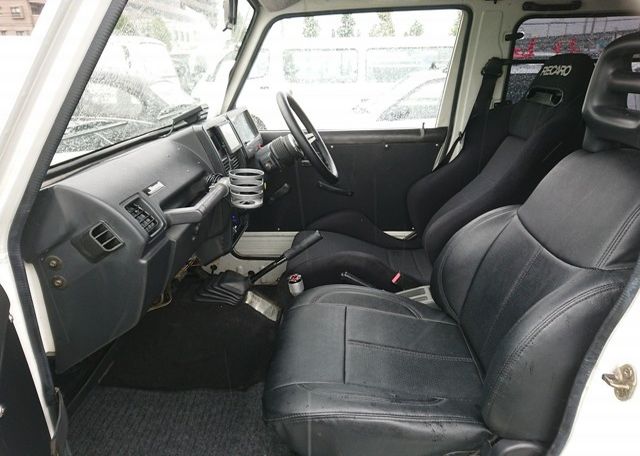 Now look in the engine bay. What do you see? 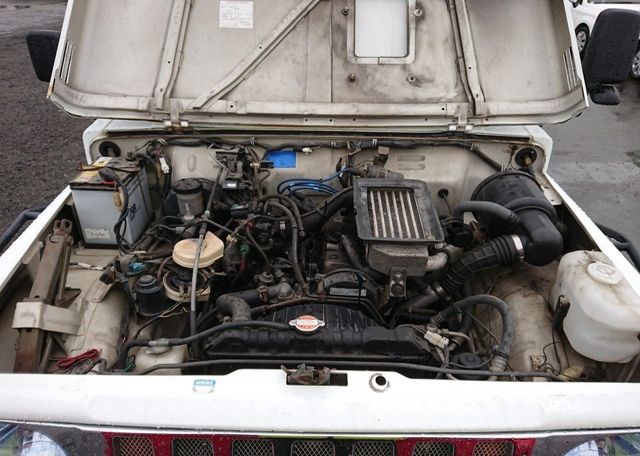 If you said: “Not much. A few things only: plug wires, a loud horn, a nice radiator cap….That looks like about it. Am I wrong?”

And I’ll say: “No, Tex, you’re not wrong. The previous owner of this Jimny knew what he was doing when it came to mods. Modding the engine was not a priority. It never is on a Jimny JA11 because stock power and performance are quite adequate.”

I had to do extensive power tuning on my first SJ10 Jimny because it was simply too underpowered for modern roads; but I never needed to touch my JA11 F6A turbo engine. I kept him just as he was. And here’s a story:

For three years I went to the Jimny Club Japan endurance race on the Asagiri Plateau. (No, I did not put my beloved SJ10 into that grueling two-hour test of man and machine.) Every year the same guy won by a solid margin and, interestingly enough, although he had the necessary mods for such an event: tank guard, top quality leaf springs and a body lift kit (for a modest 1 inch), he had not done any engine modifications or power tuning: stock engine (no over bore), stock turbo, stock intercooler. He said: “Success off road is not about power, it’s about technique and good sense.” You should have seen what those Jimnys could put up with and what they could get through. It made me cringe; but, boy, were they ever thrilling races! 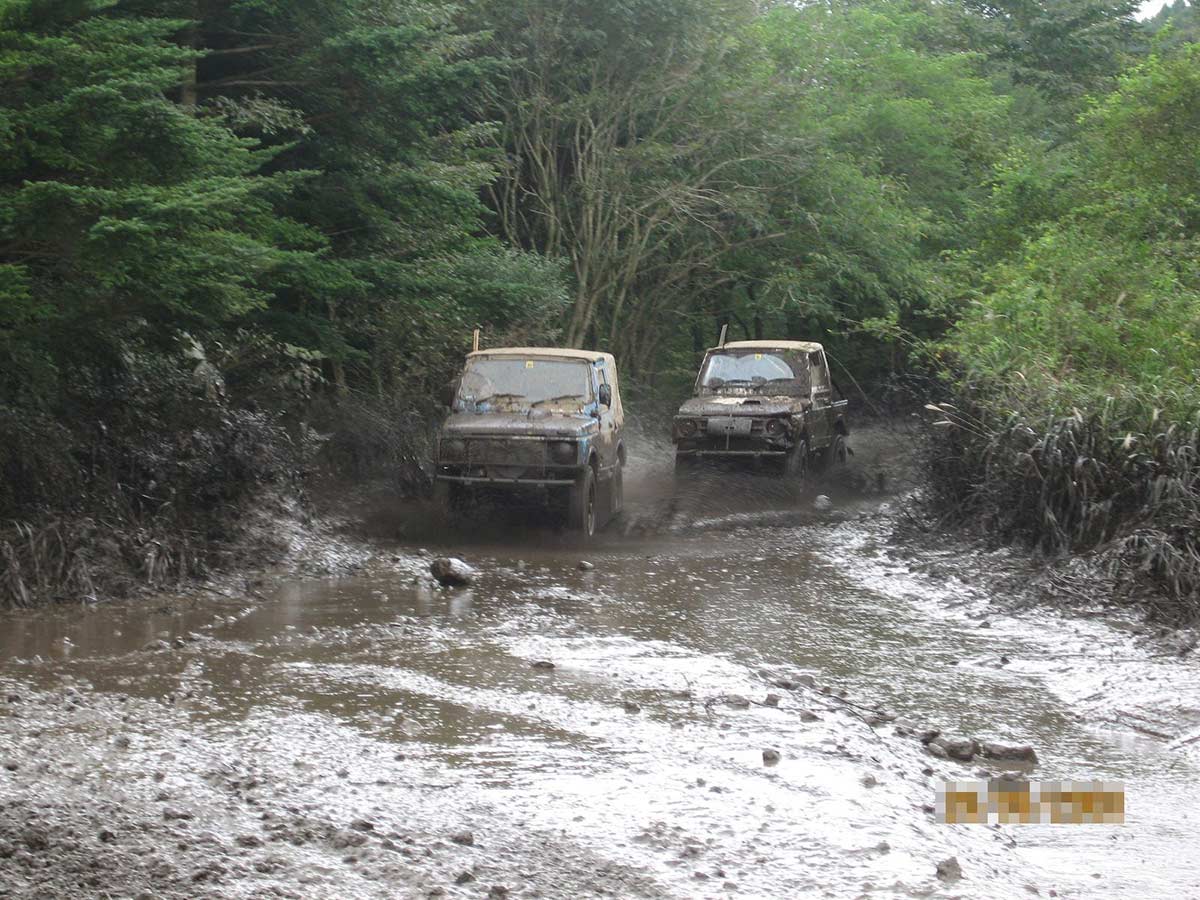 Now when we talk buying a used modified Jimny, we are not talking about cars that have been bashed around on those endurance races, and that’s why we would recommend a pre-purchase inspection for any Jimny that you want to bid on at the Japanese used car auctions. That way can you get one that has done little or no off road work here in Japan. (Actually, most Jimnys in Japan are used primarily, or even exclusively, as road cars.)

So our customer now has scored big time by purchasing, and importing himself, a Jimny direct from Japan that has a good number of well-chosen modifications and aftermarket parts. Of course you can expect a car like this to cost more than a bone-stock Jimny. And your bone-stock JA11 from Japan is a very good deal, indeed, and no doubt; so if you’re not looking at competition or tuning for the sheer joy of it, but rather you need a serious and highly capable (and cheap to run) 4WD for the hard and humble slog off road, go for and early ’90s JA11 Jimny in stock trim. (Here’s a clean, lightly modified, 1992 Jimny that we recently exported from Japan.

With either sort of Jimny, modded or stock, you’ll never make a better used car purchase, and Japan Car Direct is set up right to help you find and import the Jimny that is right for you and for your needs. Just contact us here and we’ll get you stated.

And if you want to find out more about the various models of Suzuki Jimny, their history, their specs, and their pros and cons, have a look at Japan Car Direct’s Jimny Page here.