What is the Best Kei Truck to Export from Japan? (Part 3) 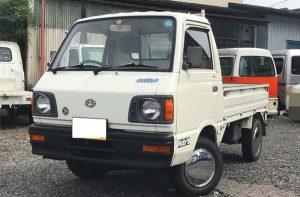 What is the Best Kei Truck to Export from Japan? (Part 3)

Now let’s climb into that little Sambar truck that came to us as a courtesy car and have a feel of what it’s like to drive on and off road.

Sitting in the cab of the Sambar, you’ll note the big front picture window that seems like a mini version of what you get on a big highway bus. It gives great forward visibility. The interior layout is simple and unsurprising, with all the controls where you want them; and the convenient little pockets on the dash are an excellent extra.

The mini truck I tested had no power steering and no air conditioning, and I will admit that the cabin heater on the Sambar takes a bit of time to warm up since the warm engine coolant has a long way to travel from the engine at the rear to the heater at the front. Steering is not overly heavy and the turning circle is nice and tight. On this road here in the middle of nowhere I could turn the truck 180 degrees with no need for a three-point turn.

This tight turning circle is a definite plus for forest and farm work. Steering is not so “responsive,” but this is a proper truck, however small, and not a sports car.

The transmission, too, is not a sporting unit and seems a bit thunky and notchy at first, but as soon as you get used to it you’ll see that the glory of the 4WD Sambar Mini Truck is its transmission: You’ve got six forward speeds (extra low, and first to fifth) and one reverse gear. 2WD to 4WD and back again is at the touch of a button in the center of the shift knob and you can switch from 2WD to 4WD and back again while moving. (Very useful on snowy roads or for climbing up steep gravel inclines where you don’t want to come to a full stop just to engage 4WD, as was necessary on my old Jimnys.)

When 4WD is engaged, a light comes on on the instrument panel.

Unlike the Suzuki Carry, the Subaru Sambar does not split 4WD into High and Low ranges. It doesn’t need to; the Sambar has its own approach to off road gearing. First gear is quite low (in fact, you’ll often find yourself starting in second on normal roads and even on easy off-road trails). So 4WD first is a good low gear for difficult starts off-road, and it’s even low enough for the Sambar to crawl along by itself in 4WD first using just engine idle.

“Extra Low” is Top of the Pops

This is all good, and what is even better is the Sambar’s Extra Low: Push the gear stick down and far to the left and you get Extra Low (EL). At the same time the little Sambar truck puts himself into 4WD and now nothing is going to stop you. He’ll walk along just at idle, he’ll take you gently and slowly down a steep hill in EL and just as gently up it. Extra Low will pull you out of pretty much anything. I especially like how, when stuck and spinning the wheels in 2WD, I could just bang it into Extra Low, jump out of the road-side ditch that I had stupidly got myself stuck in, and then go straight into 2WD second and continue down the gravel track on my merry way.

The 4WD system in the Subaru Sambar made me feel very confident in handling rough road surfaces and poor condition trails and I felt that it is a competitor to my old Jimny for practical off-road usability. I like that transmission: I like the truck-like feel, I like the well-chosen ratios, the easy of 2WD / 4WD switch, and I just love that Extra Low.

Downsides to the 4WD Sambar Truck? Well, the truck I tested was the normally aspirated engine version (without Subaru’s famous supercharger which I had in my old Sambar Van and which could really grunt from a standing start), and so it was no speed demon. Going uphill on normal roads you’ll keep up with the traffic, of course, but you won’t be passing anybody. In terms of set and poise on hard surfaced roads, the Sambar is balanced and steady. Even at 80 or 90 kilometers an hour, there is no feeling of “float” that some light vehicles give you.

One fault that I expected to find, and didn’t, was pronounced over steer on hard turning and braking on gavel. Due to the rear weight bias I expected that, braking hard going downhill on gravel, the rear end would come around. But in fact, it did so only very slightly and I felt that the little truck did not lose its poise or balance and I felt confident that the vehicle was fully under my control.

Yoshi here at Japan Car Direct did some repairs on a Sambar mini truck for us and has laid out a step-by-step procedure, with good photos, for How to Replace the Distributor Cap, Rotor, and the O-Rings here,

and for How to Replace the Timing Belt and Water Pump here.

After these repairs, Yoshi filmed the cold start of the engine and, incidentally, does a nice little walk around of the Sambar Truck and shows you the access for maintenance. This short video is worth having a quick look at, here.

Reading this review, I’m sure you can tell that I liked the 4WD Subaru Sambar mini truck. But I liked the Suzuki Carry that I tested, too. Don’t ask me to choose between mini trucks, because I like them all. In these reviews and driving tests I’m just trying to give our customers a driving impression and some information on the strong points and weak points of each mini truck or mini sports car. All Japanese mini trucks are great little machines and I find myself in love with whichever one I’m driving at the moment.

And that’s what happened to me when I drove a 1987 2-cylinder Subaru Sambar!

At Japan Car Direct we are often asked to find good old Japanese Mini Trucks for export to countries that have very restrictive used car import rules that only allow old units to be easily imported. In the case of the USA, if the kei truck is over 25 years old, it’s easier to import directly yourself. With Australia, the mini truck must be from before 1989. But no worries, I say, if you import a late 80s Sambar mini truck.

The 1987 Sambar truck that I drove was a retro, but very practical, delight.

Settling into the driver’s seat, you set the choke and fire up the EK23 two-cylinder in-line water-cooled engine. These little 550cc motors are certainly not to be sniffed at, for while they are small, they put out good power and get the little mini truck moving along fine. 28ps comes in at 5,500 rpm and 42Nm of torque at a nice low 3,500 rpm. The engine is well balanced and I didn’t notice any of the heavy vibration that is present in other two-cylinder cars that I have tested, namely a 500cc Fiat 500, a 650cc Fiat 126 and a 700cc Fiat 126bis. These Fiat engines had notable vibration. The Subaru engine does not.

Here are three views of the little beauty:

The transmission on the late 80s Sambar truck shifts firmly with no watery feel to it. It’s geared low so you can carry loads with confidence. Like newer kei trucks, these older Sambars are rated at 350kg load capacity. I have to say that I really liked the old time truck feeling of this transmission. It’s a tougher feeling gear box compared to the more modern ones, which are easier to shift and are more “civilized,” but I really like the mechanically connected feeling you get with this old Sambar transmission.

And you get that great “Extra Low” feature as we found in the newer 1994 Sambar that we tested above.

The old 2-cylinder 4WD Sambar mini truck will not easily be stopped by rough terrain.

Because the Sambar is rear-engined it has a special independent rear suspension system similar to that other, almost as famous rear-engined vehicle: the Porsche 911:

This is one of the reasons why the Subaru Sambar truck is called the “Country-side Porsche” among the farmers here in Japan.

Now, while thinking about buying a Sambar mini truck in Japan for direct export to your home country, you’re going to be thinking about the supercharged ones, right? I would. (But I would be perfectly happy with the normally aspirated, non-supercharger Sambars, too.) I tell you about what the supercharged EN07 engine is like when I talk in a following post about my own Sambar van with Sun Sun Roof. Till then, keep thinking about and planning for importing a Japanese Mini truck direct from Japan. It’s a good option.

What is the Best Kei Truck to Export from Japan? (Part 2)
PREVIOUS POST