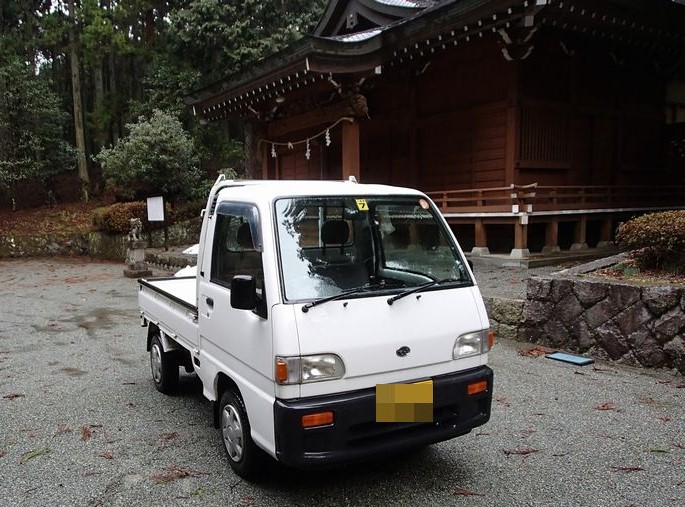 My friend had been boasting to me for a while about his 2000 model 4WD Suzuki Carry mini truck.

He knows that when it comes to light 4WD and off-road vehicles, I’m into Suzuki Jimnys (I’ve had three) and Mitsubishi Pajero Minis (I’m on my first one now and am so pleased with it that I never want to give it up, ever). He was boasting that, even in the worst snow, he could always get to work, and whenever he needed to go on one of the forest trails here, he was supremely confident that he’d always get back out of the forest and home for dinner on time, come what may. “You don’t need a Jimny for off-road and snow. Jimnys have got no load capacity. A kei truck is what you need. You can carry anything in the Carry. Ha, ha!” My friend is a bum poet as well.

So I asked him the let me test drive his 4WD Suzuki Carry to see for myself what I thought of it. These are my impressions:
The interior is more roomy feeling than the in the Honda Acty that we used to use on my father-in-law’s farm. There is nothing that seems to get in your way or is in your face, unlike with the Acty where the interior panels seem just a bit too close and claustrophobic. The one exception to this feeling of roominess in the Carry was that the steering wheel center boss, which contains the horn control, projects a touch too far towards the driver and I felt that there would be times that I, without intention, would beep the horn. Interior controls are all well laid out and in the logical places that you think they should be, so no surprises there. But the selector lever to choose between 2WD-High, 4WD-High, and 4WD-Low takes a bit of getting used to. When you are properly in one of the 4WD ranges, a green “4WD” light comes on on the instrument panel. When you think you are in 4WD and you’re not, the gears in the transfer case complain and grind loudly against each other to tell you of your error. After a few tries, however, I got used to it and had no further trouble (other than reaching for the 4WD selector when I wanted to grab the parking brake lever, but again, this is something that you just get familiar with after you’ve driven the truck a bit). The transmission itself feels like that of a real little truck: it’s firm going in and almost a bit “notchy.” It’s not resistant but it just wants you to know, with just the right amount of resistance on the gear lever, that you are in gear or not in gear. That’s why I say it’s like a little truck, as I have found that heavy truck transmissions are often like this; very different from the smooth quick shifting of a sports car gear box.

The first four gear ratios all feel fairly close with fifth seeming a bit higher to offer something of a cruising gear. These close ratios are well chosen for this little mini truck for two reasons: 1) On the road when moving off with a heavy load, these ratios get you going with confidence and a decent turn of speed for such a small (660cc) engine, and 2) Off road, those first four ratios let you always have the right gear for your needs of the moment.

The best part for me of the Suzuki Carry 4WD was the low range in 4WD. Just excellent. We took the little mini truck to some rough tracks between the rice fields and though the forest and it mastered everything effortlessly. Absolute sureness of grip, full confidence that I’ve got a suitable gear available, and a low low that is nearly as low as my old Jimny. (The Jimny would crawl along by itself in first gear 4WD low range with just the power of the engine at idle. The Carry truck is not that low, but it’s low enough that you can move off in second gear both on the street and off road. And, unlike my old Jimny, the Suzuki Carry I tested has a center differential and so you can use 4WD on hard surface roads; a no go in the old Jimny.)

The Carry’s turning circle is very tight and lets you maneuver out of pretty well any tight spot. It’s not as tight as our old Acty, but it’s more than tight enough for any practical needs.

In comparing my friend’s Suzuki Carry to our old Honda Acty, I must say that the Carry feels to be the more balanced vehicle. I noted sometimes in the Acty, going too fast down a gravel or dirt hill and braking too hard, that the rear-mid-engined Acty can sometimes have a slight over steering tendency. The Suzuki, with its engine mounted between and below the front seats, does not feel like it’s going to over steer on you. It really feels well balanced.

The Carry I tested was non-turbo, but it gets moving quite quickly and accelerates well. It’s a sprightly, happy, well balanced little truck that gets good gas mileage (according to my friend) and will blast though the heavy snow or crawl over the rough tracks to get you to work on time or to the fields and forests and back home again with no trouble and with or without a load. It does all this cheaply and reliably and that’s what we want our mini trucks to do.

So in the first part of this article looking at what is the best kei truck to export from Japan, we looked a the Suzuki Carry. Many people will consider the Carry to be the gold standard among Japanese mini trucks. And they are good and parts availability is good. Is it my personal favorite? Probably not.

Now the Suzuki Carry guys are going to ask me: “Why not? What have you got against the Carry?”

“Nothing against it,” I’ll say. I’ve got nothing against the Suzuki Carry, or against any of the Japanese mini trucks that are easily available for direct export now. It’s just that…. I’m in love with another….The Subaru Sambar: The “Countryside Porsche.”

The Honda ACTY that we used on my father-in-law’s farm went in for its Shaken inspection and the courtesy car that came from the garage was an old Subaru Sambar mini truck, a 1994 KS4 with 4WD and the N/A EN07 engine. As a fan of old, used Japanese mini trucks and mini vehicles, I never miss the opportunity to test drive one, so I took this old 4WD Sambar Truck around the fields, down the country roads, and into the forest to see how it handles and drives and what it can do. The rear-engined Sambar Truck is an impressive piece of mini truck engineering and design. Subaru is the only mini truck maker that continued with a rear engine layout through multiple generations. Other mini trucks put the engine at the front between the seats, as in the Mitsubishi Minicab, or at the front behind the front axle, as in some versions of the Daihatsu Hi-Jet. The Honda ACTY puts the engine at the back but in front of the rear axle. Only the Subaru Sambar hangs the engine right out at the back, mounted transversely behind the rear axle.

And, uniquely again in the world of mini trucks, the Sambar uses a straight four engine rather than a straight three engine, as most other mini truck makers do. Subaru’s tough little EN07 has a wonderful tuned power unit sound. (Interestingly, the earlier Sambars used an inline two cylinder motor; and that was a good little engine, too, but that’s a different story.) With the Sambar, the whole rear bumper folds down to give access to the engine from one side, while in the load bed there is a removable plate that allows you to get at the engine from another side. (To open the rear access panel you need to use the ignition key and you may need to push the whole bumper forward a bit with your hand to get the lock to unlatch.) Are you beginning to see why I’m such a fan of the unique and well-designed Sambar Truck? It’s features like these that I like so much.

In my next post here on our Japan Car Direct Blog, I’ll tell you a bit about driving the 1994 Sambar, and we’ll also have a look at the late ‘80s two cylinder Sambar. A mini truck that, though older now, is not to be overlooked if you want a solid and super simple little kei truck; especially if you want to import to Australia with their current import age restrictions.

What is the Best Kei Truck to Export from Japan? (Part 1)
PREVIOUS POST

What is the Best Kei Truck to Export from Japan? (Part 3)
NEXT POST