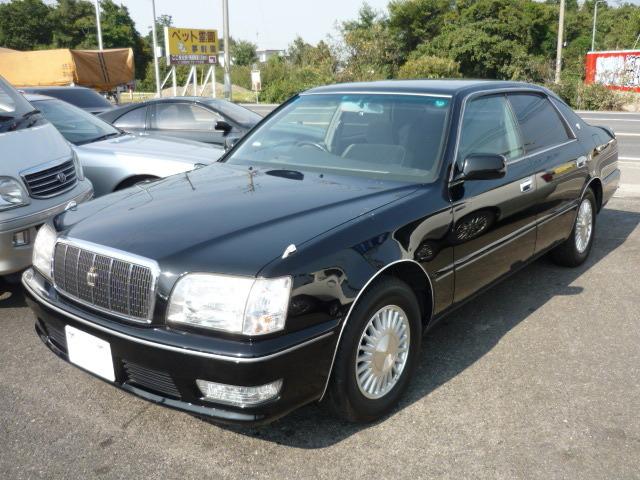 A clean used Toyota Crown Majesta from Japan gives such good value when you are looking to import a secondhand luxury car from Japan that we are going to give it its own post here in our blog series on the Best Toyota Luxury Cars. Let me start with a funny story.

A lady I know here in Japan had a dark blue, mid-nineties, Crown Majesta for years and years and just loved it to bits. I think it was a 1997, and it looked just like this one: She knows I’m a car guy and so she was happy to tell me about her experiences with that Majesta. I got a few rides in it, too, although I never drove it. I think that that car was made for her in mind. (I mentioned her in passing in our previous post on our Japan Car Direct Blog here.)

Her love affair with the Majesta began when her business finally started to turn a decent profit and she decided to reward herself and make her life easier at the same time.

You see, she’s a professional pedigree dog breeder, which is why she needed a car like the Crown Majesta. Makes sense, right? You breed pedigree dogs and so you drive a classy luxury car. Sure everybody knows that.….Or not. I didn’t get it until she explained it to me, and it wasn’t just about looking good and successful in front of her wealthy customers. Of course, if you want to look cool and classy in a fine, top end, Japanese used luxury car, you can’t do better than a Majesta. Here’s a nice clean 1994 Majesta that we exported to the USA. Yep, the 1994 and 1995 Crown Majestas are now old enough for easy export to America, and Australia, too, under the easy export rules for 25-year-old used cars.

With my dog breeder friend, the needs were different. Certainly she wanted to look good, but the main thing for her was much more practical: She needed a seriously capable highway cruiser because, whenever she could, she always visited her prospective customers before agreeing to sell them a dog.

She told me: “A lot of people buy dogs quite casually, you know; even the dogs I sell, which, if I may say so myself, cost a bomb. But just because someone has pot money to drop on a breed dog, it doesn’t mean he should have the dog, so, if I possibly can, I drive over to see any serious prospective customers before the deal is made.” I can’t be all tired out from the drive so I need a proper car that I like driving and that lets me get to where I’m going in style and ease…so, my baby. My Majesta.”

Now she chose the three liter Majesta with the straight six engine, the 2JZ-GE rather than the V8 Crown Majesta with the four liter 1Z-FE. She liked the super smoothness of the JZ and was happy to get a bit better gas mileage with the smaller engine.

Sometimes, in comparing cross-plane V8s with inline sixes, I can feel that the six is a bit smoother, but at other times I’m not sensitive enough to pick up any clear difference, but she was all for her I6. You can’t go wrong with either engine in a Crown Majesta. (For you gearhead guys who are interested in the engineering theory side of this whole issue of engine balance and smoothness, Mark Wan put up a very good article years ago here on Autozine.org. It’s a very good intro to this whole fascinating topic, and the more you know about what’s under the hood of your car, the better off you are.)

And the Majesta was certainly a relaxing car to be in. The interior was just what you expect in a fine Japanese luxury car from the 1990s: Rich, full, relaxing seats. All controls laid out ergonomically and everything in the right place. That car was big time nice. It even had a system to give a spoken warning if a door was not properly closed or if the fuel was getting low, things like that.

And then she drove it off the road and into a ditch. A month after her “prang” she told me:

“The weather was fine. It was broad daylight. It was all my fault. My Crown Majesta! My Darling! Oh my poor baby!” she lamented. “I was fumbling with my purse coming back to the house here on the farm road at the back of our housing development. It’s just a short stretch of gravel, but it helps me to save time by avoiding the traffic lights. I was going slow. I know the turn but I just missed it and went right into the drainage ditch beside old Mr Yamamoto’s vegetable field. I just drove straight off the road. Didn’t steer left or right, didn’t touch the brakes. Just straight off. Just like that.”

“Well I should think so. We came down pretty hard, and in the water, too. Needed a new front bumper and something under the car, too. The mechanic told me what it was, but I forget what he said.”

“Of course, and that was a shock. I’ve never had that happen before. All cleaned up and replaced now and my baby’s back with me…..But he talks.”

“Yeah, you told me that. It’s got that warning system for low fuel and such.”

“It’s not just that, he’s saying other things now, too. Every once in a while he’ll say something. I can’t really understand him, yet, but I think he’s trying to communicate with me.”

“He’s probably angry with you for driving him into a ditch,” I observed.

Funny enough my dog breeder friend never got that voice warming system repaired. She said that she liked it that the car talked to her now and it endeared the machine to her even more. She kept that Crown Majesta for years and years after their time together in the ditch and she never had any troubles with it. Like all 90s Toyotas, that Majesta was supremely reliable. It just talked, that’s all, and she never minded that.

Certainly, the Crown Majesta is a car that we recommend when people ask: “What is a good, cheap luxury car to import from Japan?” It’s definitely a grade up from the Toyota Crown but it is not a bloated boat. Taking a 1996 unit with the V8, the E-UZS150 series, let’s look at some specs and weights and dimensions and you’ll see why the Crown Majesta, while a full on luxury machine, is actually quite nimble, and quicker than stink.

First, dimensions and weights: The car is 4.9 meters (16 feet) long and 1.8 meters (just shy of six feet) wide. For a luxury car, not a big boat. The car weighs 1,580kgs (just under 3,500lbs), so it’s not particularly heavy for a car in its class. (Of course we’re looking at the rear-wheel-drive version. There is an all-wheel-drive version of the Majesta for people who need winter spec., and it adds about 200kgs to the all up weight. But if you need a luxury car for winter driving, the 4WD Majesta will get you where you need to go.) Now let’s look at the engine. The V8 is putting out 265ps of power at only 5,400rpm, and 37kgm of torque at 4,800rpm. So we’re getting a very nice power to weight ratio of 5.96:1 (each ps of horsepower pushing less than 6kgs of car) and a fine torque to weight ratio of 42.7:1 (each unit of torque pushing only 42.7 kilos of car. Good figures, these. (Better than a Daimler Sovereign with the 5.3 liter V12! That’s my personal benchmark.)

And if you look at the auto trans in the Majesta, you’ll see that it’s the same unit as in the first series Toyota Celsior (Lexus LS400), Now I can tell you that that car has very nice acceleration and is a quick machine. I expect that the Majesta is actually a bit quicker because, the Celsior, at 1,730kgs, is a heavier machine and its power to weight figures are not as good as those of the Majesta.

We are talking cheap V8 power here, my friends, and the prices that we are seeing now at the Japanese used car auctions and at the Japanese used car dealers for used Crown Majestas in good shape, and with low miles, are very good indeed. With a used Toyota Crown Majesta you are getting a top grade, and top quality, Luxury car that really boots, and yet is not so big front to back or left to right that you’ll have any trouble parking.

I think that these mid 90s Majestas are the ones to go for now (time of writing: November, 2020) if you want to do a self import of a used car to the USA or to Australia with their easy import rules for cars over 25 years old.

And while we’re talking here about the four-liter V8 machines, do not, do not, do not overlook the Crown Majestas with the 2JZ-GE. These are bullet proof motors and prices on used units are very good. As I said above, my dog breeder lady friend has the 2JZ Majesta and that car was definitely no slouch. On a side note, I know a gentleman here who had two Toyota Soarers in succession. He had the 4.0 liter (badged as Lexus SC400 in America) and the 3.0 liter car (badged as Lexus SC300). Now he had those two cars one after the other, so he never drove them back to back exactly, but his comment was, when I asked how much quicker the four liter was than the three liter: “Well, not so much. Both were good.” And that fits my impression, as a passenger, that the three liter Crown Majesta is, like the four liter, a quick car.

So no matter how you look at it, a mid ’90s Toyota Crown Majesta for import to America or Australia is a very good bargain if you are looking for a fine, reliable 25-year-old Toyota luxury car. If fact it’s a good buy if you are looking for any luxury machine from Japan because a used Majesta is giving you a lot of car, and a lot of power and performance, for very little money.

It won’t talk to you in exactly the way that my dog breeder friend’s car talked (literally) to her, but it will certainly communicate those feelings of luxury and quality, muscle and power, that you expect when you are driving a proper set of Japanese luxury wheels.

Contact us here at Japan Car Direct and we’ll help you find and import your own darling Majesta.

And don’t forget to have a look in at the rest of our series on the Best Toyota Luxury Cars to Import from Japan. You’ll find Part 1 here, and Part 2 here