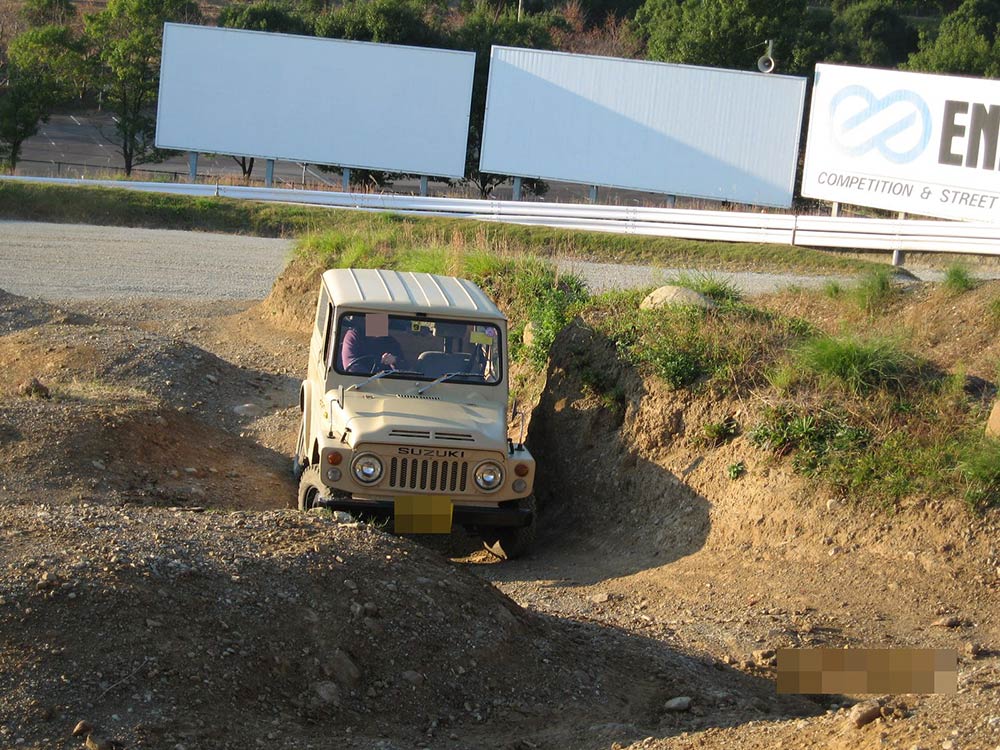 So one day I took my SJ10 Suzuki Jimny to one of those off road parks where you can go wild and bang around in your 4WD, doing all the extreme (and stupid) off road things that you would never do in the real wild country for fear of wrecking your rig or getting seriously stuck and having no tow truck to rescue you.

So I had good fun with my darling SJ10: Various types of off road cars were there: Jeeps, Pajeros, Landcruisers, you name it. And there was a bunch of guys who had come together in a group of Toyota Hi-Lux four by fours. There were six of them, six Hi-Lux pickups and…..one Jimny, a JA11. (We recently shipped a 1992 JA11 to the USA. Good car. Nice clean body on it. Have a look here.

Why the odd-man-out Jimny? I wondered to myself. Later in the day, I found out, as one of the Hi-Lux pickups got stuck between two low mud pile hills with its chassis hung up on a rock and its front and rear bumpers somehow perfectly wedged fore and aft between those two hills. He couldn’t get himself out. Then those guys brought over their Jimny, hooked up a steel cable, and pulled the Hi-Lux right out of there. Problem solved. Everybody had a good laugh, but it really got me to thinking: “Is the Jimny the best 4wd car to own when you need to get through the really tough stuff off road?”

Well, we’ve all got our favorite rig and we all swear by our own four-wheel-drives as being the best (otherwise we wouldn’t have the car, would we?) and, as with all things in the automotive world, the question of what is “best” is always application specific. Is a Jaguar V12 the best engine to swap into a Miata if you want sharp cornering and responsive handling? Likely not. Is a Honda beat the best car to use for carrying furniture? With a trunk like this: likely not. (Although I suspect both of these things have been tried by someone, somewhere. In fact, I know, from hanging out at Miata MX5.net that somebody actually has done the Jag V-12 thing. Check it out here.)

What The Jimny Is Best At
(and what it’s not)

If you need an off road car that carries six men (each six feet tall and full of muscle), six chainsaws with a quart of chain oil and a gallon of gas for each saw (that’s six quarts and six gallons by my reckoning), three tents (assuming two-man tents; you see, I can calculate), food for two days for the whole crew, and beers for the end of the day (that’s three two fours plus coolers), then buying a Suzuki Jimny is not the right choice for you.

But if you need to squeeze through the trees where you may not have even a couple of meters between the trunks, importing a nice Jimny from Japan is the right thing to do. If you need to use your 4WD for long, high-speed highway commutes, the Jimny is not going to be your first choice

But if you need a 4WD for hunting and fishing in the back country, an off road car that gets you out there and away, far away from the others whose rigs are maybe bigger, maybe heavier and maybe can’t follow you all the way to your favorite hunting ground or fishing spot (yeah!), then the Jimny is the car you. The Jimny will take you places where the other sportsmen can’t follow you unless they are willing to go in on foot. (Or unless they’ve also got a Jimny themselves, of course, or a helicopter.)

Just to get out into the wild and get away from most everybody else, the Jimny is it. I’ve gone places in my Jimnys that you just wouldn’t believe that I got into and back out of again. Crikey, even I’ve been surprised at some of the things we got into and out of when off roading here in the hills and mountains of Japan I’ve done things off road that I would not do again, and certainly that I could never have attempted in (almost) any other 4WD; but my Jimnys always got me there and back again. And they put a grin on my face, too. This guy here shows us the smile factor of the Suzuki Jimny.

Let me tell you about the first Jimny that I had. The first in the ongoing series. And I say “ongoing” because I think that, if you have serious off road needs, like I do, you will never go wrong with a Jimny; and if you are looking to buy a second hand 4WD, a used Jimny imported direct from Japan is a wise and economical move. I’m sure that I’ll buy another Jimny.

My First Jimny in Japan

When I moved back to Japan in 2002, I needed a car real quick, and it was my first time buying a car in Japan. (Previously, I’d always been able to use a company car. Nice, eh?) I went to the nearest second hand car dealer and said: “What do you have that has a manual transmission?”

I was given two choices: a Mitsubishi Mini Cab kei van and a 1990 Suzuki Jimny Turbo (JA 11 body type). My wife was not keen on the old van because she felt that, with the engine between the front seats, there was a bit too much vibration under our butts. (Fair enough point, it’s true.) The Jimny she thought was “cool.” And it sure was, sitting there with its big wheels, its squared off body giving an impression of “solid car.”

But to tell you the truth, and you all know that I am a big Jimny fan now, at the time though, I wasn’t sure. I’d never had a turbo car and I worried about maintenance and reliability. I also worried that the little 660cc engine was not going to be up to real on road driving in town, where you have to be able to get up and go at traffic lights and cross roads.

I couldn’t have been more wrong. The Jimny was ultra reliable. The only big repair job I had to do was my own fault: I ignored a stuck thermostat in the winter, drove the car anyway and so I was not letting the turbo warm up fully and stay warm. So, new turbo. (Here’s a rule for us all, then: Ignorant driver = replace turbo. Knowledgeable driver = turbo lasts forever.)

Other maintenance was just small stuff that I could do myself, like the plastic packing at the bottom of the gear lever. Cheap part, easy job.

Power? I never lacked power around town and touring around Japan, where there are LOTS of hills to climb. Never a power problem with the 660 turbo Jimny from Japan. (And if you want to power up a Jimny, there is an amazing variety of tuning parts available. This site here is in Japanese but the pictures alone will give you an idea of what’s out there to warm up your Jimny turbo, if, for some reason, you want to power it up. I never felt the need, however; although I did have to power up my SJ10. Tell you about that later.)

And that JA11 of mine was cheap to run. Regular gas, standard oils, standard, easy-to-find tire sizes, lots of parts available from Suzuki, and everything just simple, simple, simple.

And this is one of the main plusses of the Suzuki Jimny: It is a very simple car. With its body-on-frame design, minimal electrics, at least in the older cars, which are now available for easy import to the USA (my gosh, winding windows!), the Jimny has got to be one of the most simple cars on the road today. And that simplicity breed confidence off road, I can tell you.

(Another way that the earlier Jimnys, which are available for exporting now to the USA, are cheap to run and easy to fix, is that they have leaf springs, not coils. Of course, I’m not saying that leaf springs are the be all and end all of 4WD suspension. It’s not a simple topic. The guys at Four Wheeler Network have written a good, tight article about this here.

For those of you debating importing an older, leaf-spring, or a newer, coil-spring, model Jimny from Japan, it’s worth a quick read.)

Yes, the Jimny is easy to work on. Look at this photo of a JA11 engine bay, basically everything is accessible: In its simplicity and low running costs, the Jimny is truly a Japanese Kei car. These are the key notes of pretty well all Japanese Kei vehicles, and they are what make Kei cars like the Jimny so easy for me to recommend to our customers overseas in the USA, in Canada, in Australia, the UK, and the EU (to name just some of the places that we at Japan Car Direct export to.)

Another good reason to buy a Jimny in Japan and import it yourself (I know, I know, I should stop here, but I get really enthusiastic about these cars and can’t stop writing), another good reason is that most Jimnys here in Japan are not used much off road. Indeed, I can confidently say that almost none of them are used off road. They are mostly kept as second cars or as, I’ve gotta say it, poser cars. You get these guys here who put tremendous work into modding their Jimnys, body lift kits, wide mudders, extended wheel arches, turbo tuning, first class paint jobs, banks of off road lights, tints, meters, you name it; and these cars look great. But they do not taste mud or rock ever. Now the really serious guys, like the Jimny Club Japan guys, they do take their cars off road, serious off road. Endurance races like this one that I went to: You do not want to buy a Jimny from one of those guys, and we won’t sell you one. We’ll help you import a nice clean Jimny at a good price with low miles on it, and then, when you’ve got it in your hot little hand, then you can go to town on mods and wild off road. Then you will have fun big time, because that is one more great feature of the Jimny: Fun. Sure, it’s a working car for around town, on the farm, hunting, getting out into the great wild world. It’s for doing all these things (and doing them cheaply, too), but the Suzuki Jimny is also just a great, fun vehicle. Light weight, direct input (often non-power steering!), good response. A lively, mega fun driving experience.

Get your hands on one, beg, borrow from a buddy whose got one and test drive it. I’m sure you’ll agree with me and be infected by Jimny fever just like I am. (I’ve got it bad, obviously.)

I’ve told you in this article a bit about my first Jimny, that JA11 turbo. In our next article I’m going to tell you about my next two Jimnys and what I did with them, and we’ll also look at the history of the modern Jimnys (I’ll finally get on to the LJ20 and the terrific two-stroke Jimnys, I promise) and I’ll tell you about all the different types that were made and what’s most commonly available now for export from Japan.

A Classy Dominator on the Drift Track in Japan: The Toyota Mark-II
PREVIOUS POST

Buy Your Open-Top Sports Car in the Middle of Winter?!?
NEXT POST