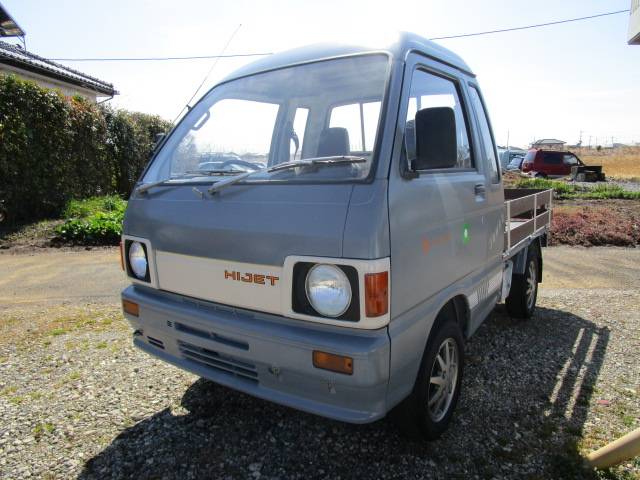 In our first blog post here about Minitruck Options we looked at Scissors Lifts, Dump Beds, and the Four Wheel Drive systems that you can get on the Japanese kei trucks that you can import from Japan.

Now what about the available transmissions?

Back in the day (wow! I’m old enough now to say things like “back in the day”) all kei trucks were manual and pretty well all came with a four speed transmission. Many transmissions, like on the old two cylinder Sambar, shifted hard and felt like they were heavy truck trannys. It was the same story with the old Jimnys. And those gearboxes just lasted nearly forever. They were “hard cars.” Check out the interior of this 1974 Hi-Jet Things were simpler back then. But not necessarily better. For a quick outline of the generational changes in minitrucks, have a look on our main site here.

And for the guys who want more detailed specs on the newer minitrucks (starting late ’80, basically) we’ve got a set of spec comparison tables here.

Hi-Jet trucks started to get optional five speeds in the 1980s and by the early 1990s (with the eighth generation) all manual Hi-Jets were 5-speed. Automatic transmissions became optional in the late 80s. Most other kei trucks followed the same transmission options around the same time.

Four-Speed vs Five-Speed vs Autobox

O.K. These can be rather thorny questions: Is it O.K. to buy a four-speed minitruck? Should I buy only a five-speed? Are the automatic minitrucks reliable? I don’t have stats and spread sheets to back up everything I’m going to say here but I’m just going to say it anyway. (If any of you guys have found that your experience has been the opposite of mine, please get in on the comments box and set us all straight.)

The old four-speed boxes are solid. If you are mostly going to be off-road or around town, do not turn your nose up at a four-speed minitruck. Is the 4-speed truck you’re looking at or bidding on a clean, promising unit at a good price? Go for it.

The drawback of the four-speed units? Between towns, when you need to get up to speed and hold it for a while, the engine will be revving higher than in a comparable 5-speed truck. So, hey, four- vs five-speed is an application specific question; like pretty well every such question in the world of cars and trucks.

Autobox? Aaaaah….well, some of the earlier automatics from the mid to late 80s can be left off your list. There are parts and reliability issues that just don’t seem to come up with the manuals. With the newer automatic units, these issues have mostly been solved and, in fact, automatic transmission kei trucks are very common now here in Japan.

As to whether you would take an autotrans off-road into the worst of the worst rock, mud, and slippery steep hill trails, I’ve got to leave that up to you as I’m a manual man and reversing down a steep hill that I should never have tried in the first place is, to me, a job for a manual box. There, I’ve said it and gotten it off my chest. One of you guys is gonna bite me for sure now. I can feel it coming. But this is one of the endless, and endlessly interesting, debates for those of us who need a serious four-wheel-drive vehicle (like a 4WD mintruck) from time to time. Road and Track has a good, tight little article on this topic with an excellent four and a half minute video here. Basically, yeah, here too, the answer to this transmission question (manual vs auto box for 4WD) is like our 4-speed vs 5-speed question: it’s application specific.

O.K., now, shifting gears a bit in our discussion of minitruck options, take your typical big old American pickup truck. Sit yourself down in the driver’s seat. What’s under your bum? Well, yeah, the seat, off course, we all know that. But under the seat? Nothing. That’s right. There’s usually nothing under the seat and so you’ve got a wee bit of storage space under there. Not a lot, but some. So a coil of rope? A pair of boots? Sure, stuff them under the seat on a rainy day, rather than letting them get wet in the load bay.

Now take your typical older minitruck. What’s under your butt? The front wheel. Any storage space there? You wish! And I will say that this is a typical inconvenience with minitrucks: Very little storage space inside the cab. Minitrucks are designed to give maximum load capacity in the load bed. In the cab any luggage you may want to carry goes on the floor on the passenger side, on the passenger seat (if there’s no passenger in there with you), or on your lap (or, rather more safely, on the passenger’s lap, right?). So the boots and the rope go on your lap when it rains.

Normally, for the things that we use kei trucks for, this lack of in-cabin storage space is not a problem, but for the guys who want to import a minitruck but really, really need just a bit more storage space, Daihatsu offers their Hi-Jet Jumbo. Here’s what the early series Jumbos looked like. (This here is a loved car.) And for the folks that are interested in the old kei trucks and old kei cars, you know, there are quite a number of really loved examples that I see here in Japan. Here’s a link to an under 1,000cc old car event that happened up in Saitama some years back. Just such loved old machines!

And here’s a photo of a newer Jumbo: Actually, Daihatsu came out with the Jumbo option way back in 1983. You give up a bit of your load bed space and, in exchange, the cab wall behind your seat is extended back, giving you a nice piece of storage space behind your seats. It is very convenient. The boots and the coil of rope are now behind your seat; dry and out of the way. But before you jump at this minitruck option, let me raise a point from my own experience. Clearly, you do lose a bit of load bed capacity. O.K. No big shakes. But what I just want to point out is, when you are picking up lengths of lumber from the home center, if they are longer than the load bed, you load them in the truck and tie them up leaning on the rack behind the cab roof. Usually no problem. They stick up a bit (or more than a bit) over the roof. Now, with the shorter load bed of the Jumbo option, those two by fours are now pointing up at a sharper angle and are actually somewhat higher over the roof. You just need to keep that in mind. They’re sticking up more up there in your Jumbo kei truck.

Now another plus of the extended cab minitruck is that the seat backs do recline rearward to a much greater degree than you will get with a standard cab kei truck. This is no surprise, considering that the seat backs in your typical kei truck don’t extend back at all! So, what the car designers call seat travel is greatly improved with the Daihatsu Jumbo.

There’s more to talk about in the world of kei truck options, where can we stop? You can get various types of covers for the load bed, you can get nice powerful lights for the load bed. I’ve used these. I recommend these. They are very convenient at night and you can even angle it to work as an auxiliary back up light. Air conditioning? Well, not on the 80s minitrucks. Even through the first half of the 90s I don’t come too often across used trucks that have that feature. But after around 1995/6 you’re getting it more often. On every unit? No. but it’s fairly common. If you really want air-con on a 1990s minitruck, be sure to let us know. Insisting on it will limit your choice of older units that you can bid on, but you can get air-con. Don’t despair. Don’t sweat it.

O.K. let’s bring this post to a close before my boss whaps me upside the head for talking too long about minitrucks rather than getting out there and finding the good, clean units to ship over the the US, the UK, Canada, Australia, the EU, and our other overseas markets.

But, basically, there is a kei truck option for pretty well anything that you need your minitruck to do for work or for leisure.

And there’ s one more option: If you need your minitruck to double as a garden, it’s not a problem, and the Kei Truck Garden Competition is organized annually by the Japan Federation of Landscape Contractors. Spoon and Tamago has a nice little write up on their site and some lovely photos here that are well worth a few minutes of your time.