Last and Best of the Hawkeye Imprezas

When you decide to import a used Impreza WRX from Japan you are immediately confronted with quite a variety of sub types. And they are all too good cars, too. If you are looking at the first series, the “Hawkeye” Imprezas, you’ve got (with the 1,994cc EJ20 flat four engine) the WRX, the WRX STi, the WRX Type R, and the WRX Type RA (I’m sure there is a version that I’ve missed here); of the Impreza WRX STi itself there are six versions (Versions I to Version VI), and then there is the S201 subtype of STi Impreza and also the 22B subtype. The 22B comes with Subaru’s 2,012cc EJ22 power unit, which is also a flat four. It’s nearly the same engine as the EJ20 except that it is bored up from 92mm to 96.9mm (stroke remains the same), and it has a somewhat different power curve; it’s more oriented to the lower rpm range than the EJ20 is.

My WRX was a 1996 STi Version III, looking almost exactly like this rocket 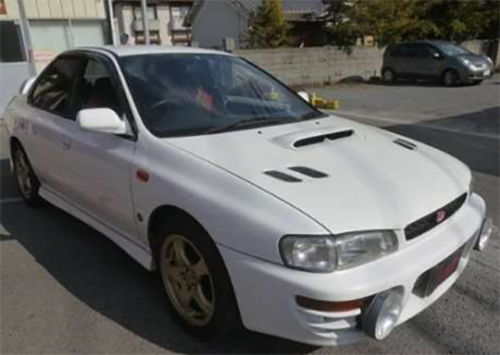 that we talked about elsewhere on our site here.

My STi was the fastest car (0-60) that I’ve ever owned; clearly quicker than my 1995 Toyota Celica GT-4, who was a quick sub 6 second car himself. But the STi…man! he wasn’t just quick, he was scary fast! I used to take my friends out to the back country roads near where I lived back then and, when we go to a nice clear straight stretch with no side roads, I’d come to a full stop, turn to my passenger and say: “This car’s fast. Watch this and hold on!” Then I’d floor the throttle to redline in first and then in second, by which point we were over CENSORED kms and my passenger was gasping. Later, while picking his face off the seat’s head rest and reinstalling it to the front of his head, he’d say something profound like: “Yeah, this car’s fast.” I can’t recall any of my passengers disagreeing with that judgment.

Now this blue bullet that we are looking at here 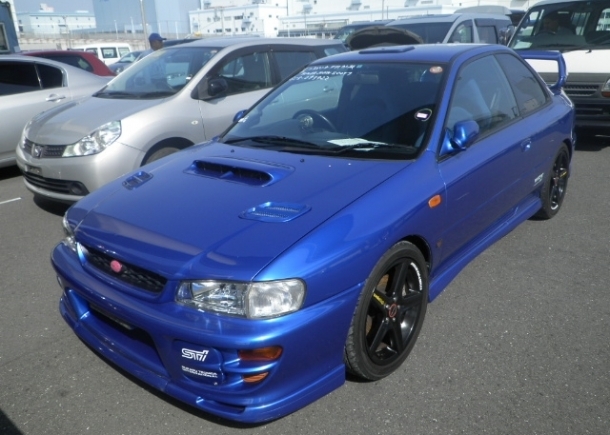 is a year 2000 model, the last of the Hawkeye Imprezas. He’s even more powerful than my Version III with torque now at 36kgm and horsepower at comfortably over 300. The car only weighs 1,260kgs (2,780lbs). Go on, Tex, punch those numbers into your calculator and come up with some power to weight figures for me. Then go and do the same with some of your dream Italian supercars. Yep, you guessed it, an Imprezza WRX STi Type R like this car has supercar power to weight (or better). And it’s got a solid All Wheel Drive (AWD) system that puts all that power down to the road. And does it reliably, too, by the way. I never had any problems with the drive system on my STi Version III and I had over 160,000kms (over 100,000miles) on him when I sold him, and never even any odd vibration, noise, or feeling of wear from the trans, the transfer, or the diffs. (I can’t say that about my GT4, though…sorry Toyota.)

So the WRX STi Type R is a flat out supercar and no doubt. What makes it different is that it is an attainable supercar. You can import a good, clean used Impreza from us here in Japan and it’s not going to send you to the poor house. (Can’t say that for your average Lamborghini, can you?)

Not a fair comparison to make? Maybe not when we consider the differing genesis of a Gallardo or an Aventador vs an Impreza WRX. The Lambo is conceived very far 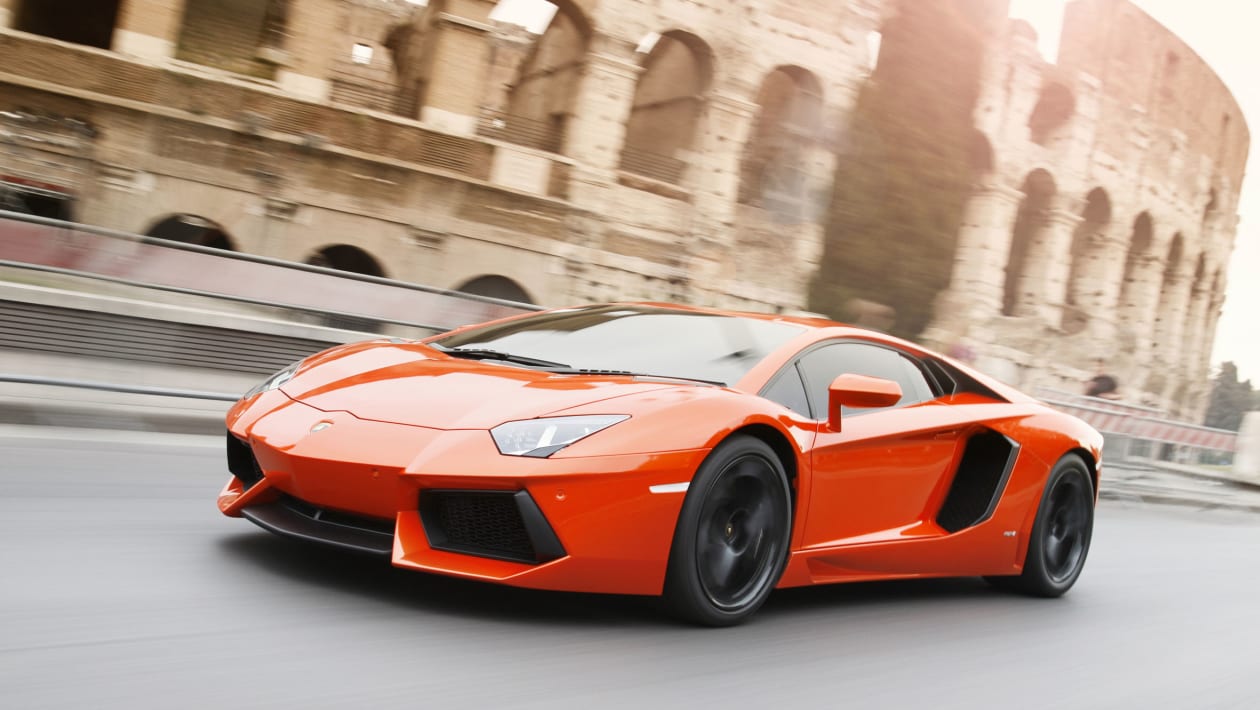 from the world of World Rally eXperimental, WRX. 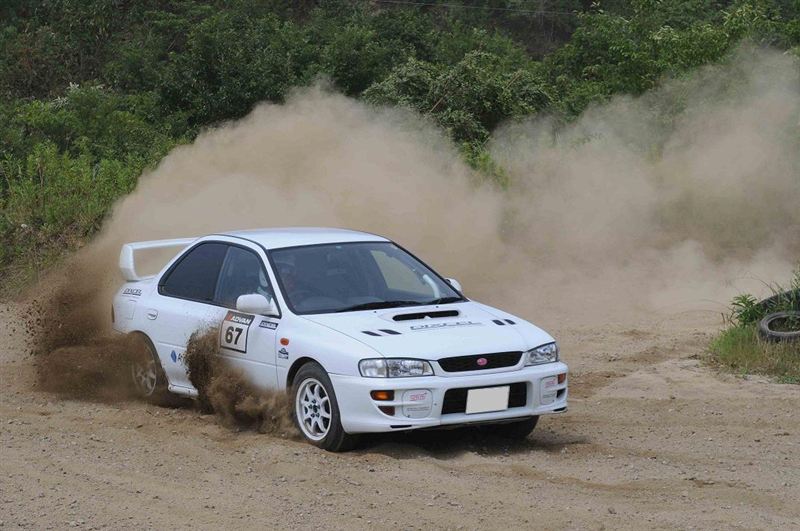 (A more reasonable comparison is between the Impreza WRX and the Lancer Evolution. Have a look elsewhere on our site here.)

It’s the Impreza’s birth as a real car for real people sedan (and don’t forget the excellent sports wagon body version), and its development as a top rally car, that give it the strength and practicality that are so attractive to performance car enthusiasts worldwide, and especially in the UK. We have exported many, many of all grades and years of used Subaru Impreza WRX cars to Britain over the years right up to today. The country roads in the UK are among the most beautiful in the world, and some are challenging, to say the least (give me some of those tight, hedge bordered roads in Wales that I used to run on!) on those rainy, misty days that come so often. (Perhaps a bit too often.) The Hawkeye WRX STi (1992 to 2000 model years) has the All Wheel Drive and excellent brakes that spirited driving on UK roads demand, and the car is actually fairly narrow at 1,690mm. (And don’t miss this “Blobeye” Impreza Spec C here of the next generation, GDB chassis version, that we also imported to the UK.)

Here in Japan, where the roads can also be uncomfortably tight, I often found that my Version III would slip comfortably through tight spots that I would have had to be more nervous about in my GT-4. (Body shape, and not only total width is key here: In the WRX you sit just a bit higher and the sides of the car are less curved out so that it is easier to judge your width for passing and parking. An important practical point.

And the practicality of the Subaru Impreza WRX has always been another of its strong points: You get a supercar that still covers day to day living: Reliability, reasonable running costs, good load and passenger capacity, compact exterior dimensions, and…..0-60 in less than five seconds. You see why here at Japan Car Direct we are confident to recommend the WRX as a top choice for guys looking to import a fast car from Japan. Whether we source your Impreza WRX from the Japanese used car auctions or from the good Japanese used car dealers that we work with, we can help you find a nice, clean, low miles unit that will keep you rocketing for years and years to come. And you don’t have to be in the UK to appreciate or to import a used WRX STi from Japan. In Canada and the EU, fifteen year old used cars are easy to import yourself and, under their 25 year old used car rules, you can now import good WRX STi cars of the Version I, Version II, or Version III series to the USA and Australia. To my American and Aussie fans of speed power and handling: Go for a Version III like I had and you’ll be happy gear heads.

Contact us here at Japan Car Direct and we’ll get you in your rocket, your own Attainable Supercar.

Now, if your taste runs more toward the “Unattainable Supercars,” don’t despair, because we have sourced some very good condition, and very reasonably priced, European supercars such as Lamborghini, Ferrari, Maserati, Porsche, and Lotus for our customers in the US, the UK, Australia, Canada, and the European Union. What? Import a used European Supercar from Japan back to the EU?!? You bet. Check out our Japan Car Direct Blog here, here, and here.