Maneuverable, Tough As Nails, Long Lasting and Economical. The Mitsubishi Canter is Top in the 2 to 3 Ton Dump Truck Class.

Most of our building supply and landscaping jobs were in town and there were some pretty narrow back alleys and tight turns to be made when delivering loads of gravel or brick sand; or pallets of blocks and paving stones. The old trucks we had were all conventionals (cabs with a snout) in the five-ton class and they turned like pigs. What I wouldn’t have given for a cab-over like this 2-ton used Canter dump that our customer has just imported from Japan to Georgetown in the Cayman Islands!

When it comes to dump trucks in the 2 to 3 ton class (single axle, of course), the Mitsubishi Canter does everything right. These trucks are in the “light duty” class and are exactly what is needed for landscapers and smaller construction firms, road maintenance companies, and larger agricultural concerns.

A Dump Truck for the Tight Spots

What makes the Canter so good? Why would I have wanted one so much back in my truck driving days at the building supply company? Well, first off, the Canter (which, I’m pretty sure, came out way back in the ’60s) has always been narrow. From left to right it’s not such a big machine. This counts big time on many small to medium landscaping jobs and it counts really big time when you have to drive around in town, and when you have to maneuver your dump truck in a tight construction site. Secondly, the Canter has a tight turning circle. I sure would have liked to have a Canter that day I took a load of bricks and 40lb bags of cement down a back alley to a house in Toronto and couldn’t make the turn. If my five ton GMC hog had been able to turn tighter, I wouldn’t have scraped the corner of Mr “Angry” Al Johnston’s garage. My company patched the whole corner of that garage good as new (better, actually) but Angry Al was spitting mad at me forever after.

The third plus (of many) for the Canter is its cab-over layout. It simply gives much, much better visibility forward and down (and left and down, and right and down) when maneuvering in tight spots. And if you look at the left and right side windows on our Canter here in the photographs, you’ll see that they slope down at the front, giving you an even better look down and to the front corners. The old ford C-700 I drove for an industrial laundry company (yes, there are such businesses) tried to give this extra forward and down visibility with its wrap-around front windscreen; not a bad idea in itself. 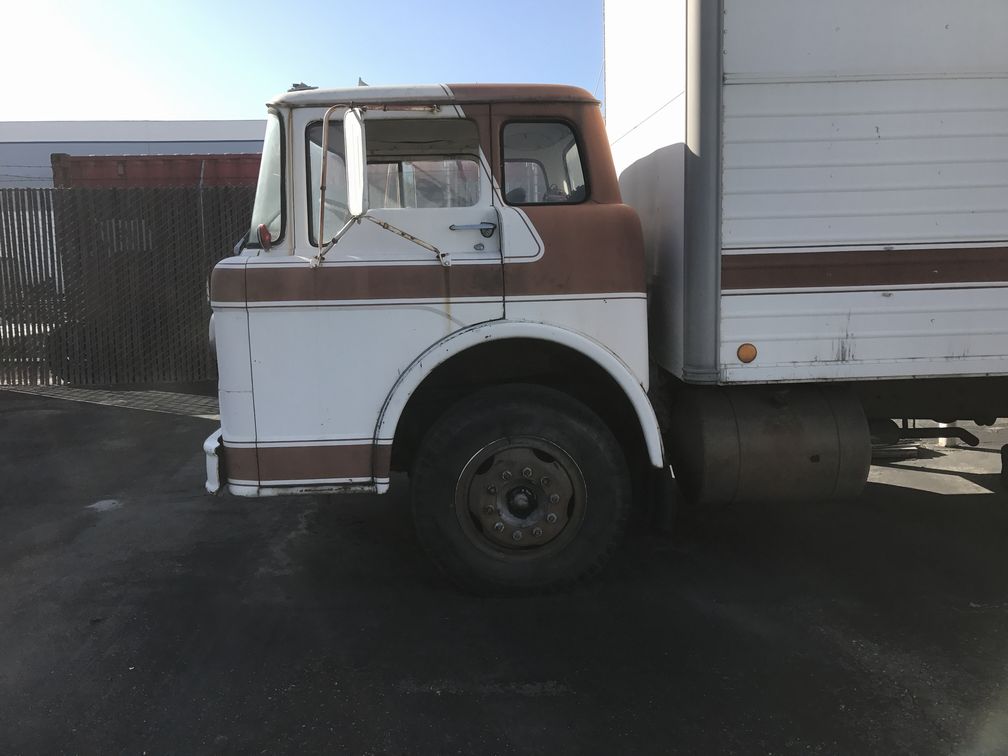 And, also with operational visibility in mind, note the grill on the Canter’s dump body fore plate which makes backing up a whole lot easier. Note also the big side mirrors, and, especially, the front and down mirror that lets you see exactly how close your bumper is to what is just in front of you. (Yep, the Canter is the light dump truck King of Tight Spots.)

A Canter Dump Has Many Plusses

And we have not exhausted the good points of the Mitsubishi Canter yet. Not at all. These Japanese dump trucks are quite economical and fuel efficient. With the truck you are looking at here, you’ve got a four-cylinder turbo diesel engine with intercooler. At just under 3,000cc, it is not a big unit but it has good diesel grunt: 123hp (92kW) at 3,200rpm and 30kgm of torque at a nice low 1,800rpm. The engine itself, 4M42 is Mitsubishi’s designation for it, is a sophisticated little thing, actually. In addition to its being turbo intercooled, it’s a dual overhead cam design with four valves per cylinder. Nice.

This engine also dispenses with the older mechanical injection system for the injector pump and now has EDC (electronic diesel control) for better efficiency, emissions, power and fuel consumption. Even nicer.

It’s also known as a very reliable little guy, and the 176,000kms (110,000miles) on the engine in this used truck is nothing for a Mitsubishi 4M series engine.

Now driving the old dump trucks that I used to did not put me in the lap of luxury. One of Mitsubishi’s targets with these 7th generation (in production from 2002 to 2010) Canter trucks was to make the cab interior more comfortable. The actual interior space left to right, fore to aft, and floor to roof has been increased over the 6th gen Canter, and they are certainly more ergonomic than what I used to drive. For example, if you look at our photos here, you’ll see that the gear shift has been moved from the center floor forward and up to the dash. This makes your reach a bit easier and also clears some leg room for the center passenger. Good idea.

Of course, you’ll already have noticed that the Canter has three front seats, so if the job needs a crew of three guys, you don’t have to drive an extra car or truck to the site. Yet another good idea.

So, when you are looking to import a dump truck from Japan in the 2-3 ton, single axle class, you’ve got to keep the Canter high on your list of used vehicles for self import.

Of course, if you need something much lighter, then it’s the Kei dump trucks (like this one here)

all the way, especially for the smaller landscaping jobs. We have shipped quite a lot of these little marvels of efficiency and reliability, and you can see some of our Kei trucks here, here, and here.

We also have spec tables and general information for Kei trucks (minitucks) here and here.

We have even written about them on our Japan Car Direct blog. The first article in the series What is the Best Kei truck to Export from Japan starts here.

Now, as I mentioned above, this used Canter dump truck has been imported to Georgetown in the Caymans. We get a fair number of enquiries asking us if it’s possible to import a used vehicle from Japan to the West Indies. There are so many countries in “The Islands” that I can’t give you a blanket answer. You’ll need to check your own country’s used vehicle import rules, but where direct import from Japan is permitted, we at Japan Car Direct can certainly source a good unit for you and arrange the shipping and necessary export documentation. So whether it’s a used dump truck like our Canter here, or an even bigger commercial vehicle like this Nissan Condor here that we exported with its big box van body, used commercial vehicle export from Japan is a great way to get yourself the truck you need for the job you do.

Register with us and we’ll get your commercial vehicle wheels rolling.