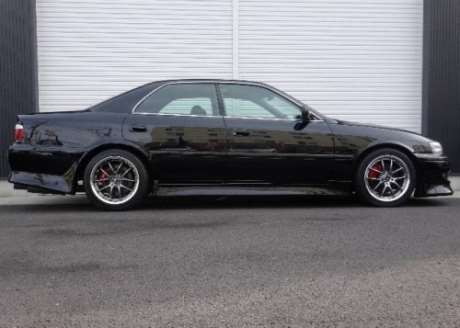 One of the “heavies” in the drift car world. With its nearly indestructible turbo 1JZ-GTE, the sky’s the limit for power on boost.

The JDM Chaser is fast. I knew it was fast even in the early 1990s because its cousin, the Cressida, left me in the dust years before on a straightaway in the US. So I wasn’t too surprised when it became one of the most popular JDM performance cars among the many great used vehicles available in Japan.

By the time the Toyota Chaser JZX100 hit Japanese showrooms in 1996, Chasers had earned a solid reputation among serious enthusiasts. Front-wheel-drive vehicles were all the rage among consumers, but front-engine rear-wheel-drive Chasers had the right stuff for drifting and tuning.

The JZX100 Chaser Tourer V is especially appealing with its turbocharged 2.5-liter inline-six 24-valve 1JZ-GTE engine, advanced VVTi and optional 5-speed manual transmission. Not only does it produce an impressive 280 PS and 280 lb.ft of torque, but it handles quite well courtesy of front and rear double wishbones with coil springs.

Chasers continue to have a fanatical following and when you browse sites frequented by their fans you discover enthusiasm verging on obsession both in Japan and on English sites where “I’ve gotta get a Chaser” is practically a mantra.

At Japan Car Direct, we receive a lot of fervent requests for Chasers from enthusiasts abroad and can source them in good condition at highly reasonable prices from Japanese used car auctions and dealers.

We feel the passion of enthusiasts is well grounded because Chasers are so solid and reliable, beautiful in their understated elegance, and bursting with potential for serious tuning and modification. Just take a look at this 1998 Toyota Chaser we sourced and shipped to an enthusiast in the UK.

The Toyota Chaser JZX100 is widely considered the best Chaser series ever. But JZX90 series models are also excellent, and we’d love to lend you a hand by answering your questions, finding the best deal, and shipping the Chaser of your dreams to your nearest port.