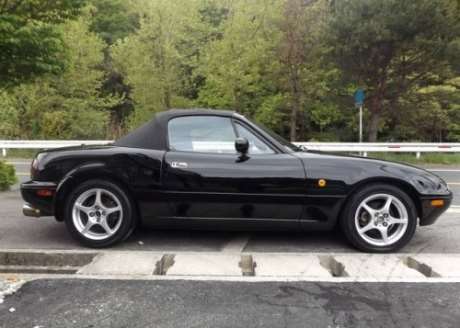 The best-selling sports car ever, the Mazda MX5 is known in the United States as the Miata, and Roadster in Japan. The first generation MX5s development can be summed up by the phrase Jinba Ittai (人馬一体) which translates to “horse and rider as one”. The first generation, the NA, was sold from May 1989 to 1997. In 1993 the original 1.6 liter inline four cylinder engine was replaced with a 1.8 liter inline four cylinder engine, which bumped up the original 115 bhp horsepower rating to 129 bhp. The 1996 and later NA raised that up even further to 133 bhp. The NA weighed less than 1000 kg (curb weight 2,120 lb) and had 50:50 weight distribution. More importantly the engine was placed behind the front wheels in order to maximize handling characteristics.