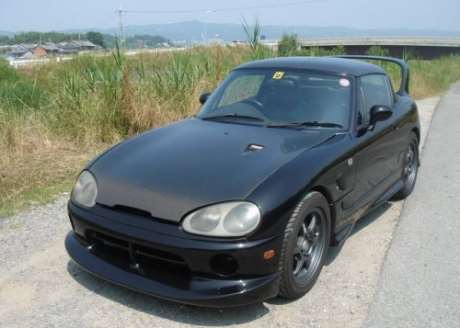 Stimulating in performance and Italianesque in flavor, the Suzuki Cappuccino is very aptly named. Of all the used kei vehicles available in Japan, it is definitely one of the most beautiful and fun to drive.

The first time I saw a Suzuki Cappuccino in Tokyo in the early 1990s was the first time I decided that Japanese kei cars were for me. To my eyes, it embodied the best of Italian design and Japanese practicality. Supercars may be more fun at high speeds, but this turbocharged pocket rocket is a blast even on city streets.

Apparently, many British at the time felt the same way because Suzuki ended up exporting the Cappuccino to the U.K. for three years straight. Suzuki Cappuccino clubs are still popular in the UK, where these cars are highly treasured by both male and female drivers. You should see how great it looks in pink for the ladies!

As a kei minicar, the Cappuccino is extremely small, but there’s plenty of room inside for two adults. You can also partially or fully remove the roof for open-air motoring enjoyment.

Excellent handling and engine performance make the Cappuccino fun to drive. Its three-cylinder 660cc engine may be small, but revs high with an 8,500 rpm redline and receives a significant boost from an intercooled turbocharger. It’s also teamed with a 5-speed manual transmission for sporty control.

So, there is more than enough power for the extremely lightweight (725kg), partially aluminum Cappuccino. The engine is also mounted in the middle of the vehicle for an ideal 50/50 weight distribution that combines with front and rear double wishbones and four-wheel disc brakes for outstanding handling that encourages you to push it around corners.

Here’s a sporty red 1992 Suzuki Cappuccino we sourced from a secondhand car auction in Japan and shipped to a customer abroad. Since the Cappuccino was produced from 1991 to 1997, there are still plenty of used models in Japan and we can find you a vehicle from any year in great condition. There are few cars that offer so much for so little and we highly recommend this popular model.