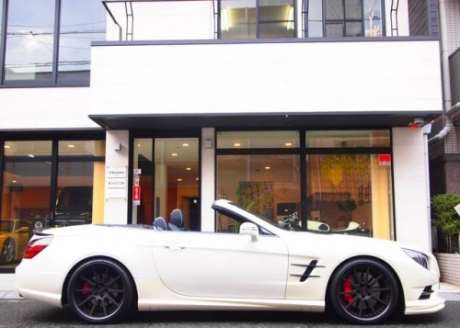 The top luxury convertible in the world: SL-Class. Pull up to the front door in one of these and it’s klasse. Marvelous. You have “arrived.”

The Mercedes Benz SL 500 has long been the choice of affluent enthusiasts. There may be sportier open-top two-seaters, but the SL 500 fully expresses both sportiness and luxury with an understated elegance that reigns supreme. Very few used vehicles available in Japan are as highly treasured, and we recommend importing one from the Japanese used car market where enthusiasts shower them with meticulous care.

First introduced in 1980, the SL 500, which is known as the SL 550 in the United States, has been one of the higher end Mercedes Benz SL models ever since. Handling is relatively nimble and the powerful V8 engine, ranging from 4.7 to 5.5 liters, delivers powerful torque throughout the rpm range with a pleasing growl.

From long hood to compact rear, the Mercedes Benz SL 500 is simply beautiful. Its luxurious leather interior is gorgeous as well, with an impeccable fit and finish, supportive bucket seats and all the power amenities and safety systems you could hope for. Even with the top retracted for open-air driving pleasure, there is plenty of storage space behind the seats and in the generous sized trunk for practical everyday use.

Japan Car Direct exports its fair share of used Mercedes Benz SL series vehicles from Japan and can source them at request in excellent condition from as early as the 1980s or as late as this year. Here’s a 1996 Mercedes Benz SL 500 with only 37,000 kilometers on the odometer that we picked up at a Japanese used car auction for a very reasonable price and shipped without delay to a happy customer abroad.

Whether you choose an SL 500 with luxury options or an AMG-enhanced SL 500 with near supercar performance, all models are highly collectible and should continue to rise in value. When searching for older models, keep in mind that the SL 500 was called the 500 SL until 1994.