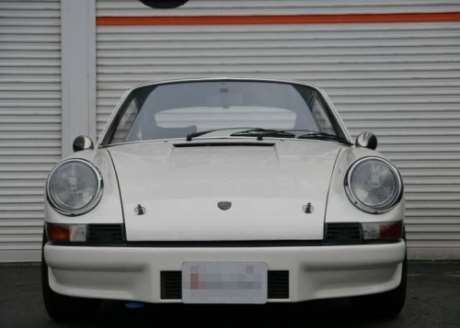 What a beauty! The purity of the air-cooled 911 with the 2.4 liter N/A engine. You can find them in beautiful shape at surprisingly reasonable prices in Japan.

The classic curves, exhilarating performance and racing heritage of air-cooled Porsche 911s make them simply irresistible — especially when imported at a bargain price from among the countless fantastic used vehicles available from Japan.

Since many air-cooled Porsche 911s from the 1990s and 1980s have become outrageously expensive, more and more smart enthusiasts are turning to earlier air-cooled models offering the impressive power, joyful handling and beautiful styling purists demand.

Among the more affordable options are 1972 E series Porsche 911s with naturally aspirated, air-cooled, fuel-injected 2.4-liter flat-six engines (actually 2.341 liters). I remember them being the most exotic and desirable automobiles in my Virginia neighborhood as a wide-eyed, envious kid. And for me, they haven’t lost any of their original appeal. Even the outlandish exhaust note still sends shivers down my spine.

Whether you prefer the lightweight 911T (157 hp), 911E (185 hp) or 911S (210 hp) with standard front spoiler, all offer powerful performance, light steering and a race-bred 4 or 5-speed manual transmission with H shift pattern with torque peaking earlier in the 911T and later in the 911S.

Used Porsche 911s are one of our specialties at Japan Car Direct and we export many affordable models in great condition every year to very appreciative customers in Europe, the United States, Canada and elsewhere. Check the prices and condition of used 911s available in your area. Then compare them with what we can offer you from Japan. You’ll discover it’s a no brainer. So the sooner you get in touch, the sooner you’ll be savoring the pure pleasure of a used Porsche 911.
Whether you seek an early air-cooled model from 1972 or a later air-cooled model like this 1993 911 Carrera 2, we can help you find the right model in the right condition in Japan.