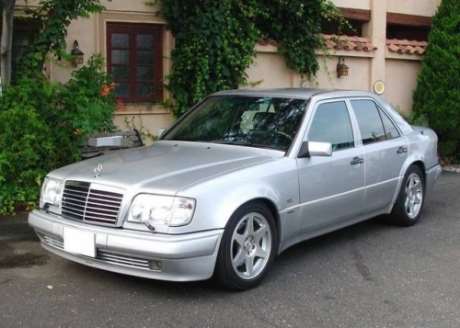 One of the first post Mercedes-Benz and AMG merger cars made. It is believed that less than 400 of these E36 AMG were manufactured by hand at the Mercedes-Benz Affalterbach plant in Germany. The chain driven dual overhead camshaft 24 valve 3.6 liter inline six cylinder engine (10.5:1 compression ratio) with sequential fuel injection made an estimated 200 kW at 5,500 rpm and propelled the 1610 kg vehicle via 4 speed automatic transmission from 0 to 100 km/h in 6.7 seconds. The upgrades from the standard 2.8 liter M104 engine includes: Aluminum forged pistons with shorter skirts, balanced and modified OM603 crankshaft, larger intake cross over pipe, exhaust, camshaft, modified and tuned Motronic M 3.4.2 engine management and Sodium cooled exhaust valves. The E36 AMGs produced after November of 1996 had front side airbags as standard in addition to the standard front airbags. While the E55 AMG that took the place of the E36 AMG is often seen as more desirable, the limited quantities and status as one of the earlier post-merger vehicles is starting to raise interest in the E36 AMG.