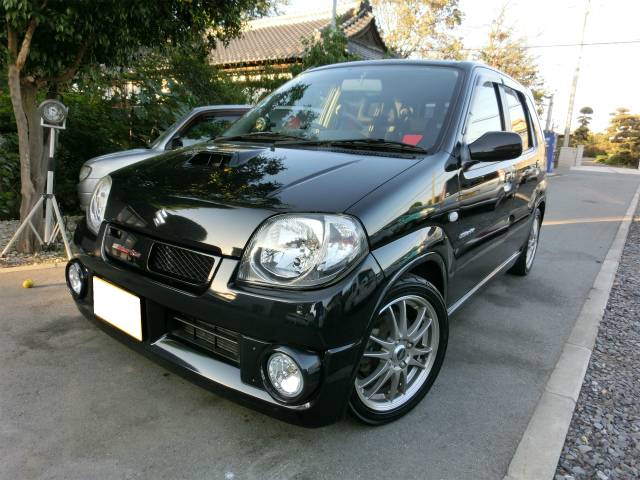 You’ll recall that in our second post on Japanese Kei Sports cars here we talked about the changes in Kei Car specification rules after October of 1998: basically Kei cars all get 10cm (just less than four inches) longer, and 8cm (just over three inches) wider; and they do get a bit heavier on average, too. (We have some detailed spec comparison tables here for all you guys who, like me, love car stats and numbers.)

Did this spell the end of the Kei Sports car joy? Not at all.

Now I’ll admit that before I drove my first post 1998 Kei Sports car I was prepared to be disappointed. You see, when it comes to sports cars, I am a purist. Old school. I want light weight. I count kilos on this. I want small but highly tuned engines. I count cubic centimeters and power per cc ratios. I want good looks. I count warts and exclude the ugly. And I don’t go for automatic transmissions.

So with all the modern restrictions on car design, with all the government mandated weight-adding crap on cars after the year 2000, I was expecting, even years ago, that not much would ever again come on the market to turn my crank.

Well, I was wrong.

In November of 1999 Daihatsu came out with the Mira Gino Turbo. The oldest of these cars are finally coming to 20 years old and clear the used car import regulations for more countries now. (But not the USA yet.) And I can say that the usual Daihatsu build quality is kept up in the Mira Ginos. I have not seen a dumpy one here in Japan ever. They last well and look good.

But how do they drive? Really good.

A bit of wheedling and begging and I got a chance to take one out and bomb it around the hill roads across the valley from where I am up here on Mount Fuji. Nice winding roads and countryside roads. This is the Mira Gino’s territory. The Gino’s handling is spot on on these types of roads. Tight. Holds the road tight. Predictable. No feeling of skittishness or jitteriness at all, even close to the limit. For such a light car the Gino felt solidly planted. Power was excellent.

Whipping too fast into a narrow corner between two fields once on my back road test drive, I had no need to fear my own over enthusiasm; just off the throttle, hold the wheel firm and point the little sport in the direction I wanted to go (and not the direction physics told me that I had foolishly pushed the car into), and the Gino held that road for me and we came out of the corner in much better form than was justified by my driving skill. And with his 165 tires, the car could stop on the proverbial dime. Put the throttle down again and you rocket off quick like a bunny. (LSD was an option on some years for the Turbo Ginos.)

My gosh that car was fun. And since that time, I’ve had in my mind that, although it is a post October 1998 Kei Sports car, it is going to be an option for me, even old school that I am.

And, guys, old school that I am, I have to confess that that Daihatsu Mira Gino Turbo that so firmly tuned my crank was…..I’ve got to admit this…I’ve got to come clean…here: that car was an automatic!

But it was just great.

I’m still old school, but after my time in the Gino, I would not dismiss automatics out of hand for fun sports car motoring. (And it is a very tunable little machine and responds well to body upgrades for looks and style. Have a look here right at 3:27 on the video for a nice line up of looks-tuned Ginos.)

No (almost no) Complaints From Me

This is a (nearly) no complaints car for me. I can recommend it with no hesitation.

So what is my complaint? The only thing that holds me back is that my parking space is so narrow (typical of Japan) that I don’t want the extra 8cm / 3in of width of the post 1998 Kei class. But I don’t think that this will be a problem for our customers planning to import a Japanese Kei vehicle to Australia, the USA, or Canada (or even the UK or Continental Europe); this car will certainly be considered easy to park.

Now, unlike most Kei Sports cars, the Gino has a rather “poshy” interior. As this nice driver’s side view shows. And this leads to my only other issue with the Gino: the comfortable rear seat has thick padding and so you can’t fold the seat back down fully unless you remove the seat bottom, which is easily done as it is designed to just unclip so you can remove it and leave it at home when you want to haul a load (which a Mira Gino, like any Mira, can do quite well for such a small car).

Yeah, I know, I know, I’m being nit-picky. But hey, if I’m going to review a car for you, I’ve got to be honest if I find something about it that I would like to be different.

But would I buy a Gino?

Based on my experience with the car: Oh, yes! Daihatsu sort of shifted their target with these later cars and they are not as sporty any more. They go up a bit in weight again and the turbo is no longer offered; neither is a manual transmission. I don’t think that we can expect these to be serious Japanese Kei Sports Cars, so I’ll just leave it at that.

The other post October 1998 Kei Sports Car that is well worth consideration, if you are looking to import a car yourself from Japan, is the Suzuki Kei Works. Meaner and more serious looking than the Alto Lapin SS or even than the original Alto Works, the Suzuki Kei Works looks tough and hard. The car is in fact classified as a light RV in Japan and the tough looks fit the part. The 15 inch rims are notably bigger than the 13 inchers found on the Alto Works or the 14s on the Lapin SS and the car sits higher and has good ground clearance. But it also has an increase in overall height, and this, plus the bigger wheels may detract somewhat from the pure sports handling side of things. However, don’t quote me on that as I have not yet driven the Kei Works and so I can’t tell you from my own experience; and even if the handling is not as sharp as the Alto Works, I am confident that it is still very good indeed. The Kei Works shares a number of elements with Suzuki’s excellent handling Swift Sports.

It is still a light machine at 780kgs (1,720lbs) and comes with the turbo intercooled K6A putting out a very respectable 10.8kgm of torque at a low 3,500 rpm (published horsepower figures are, of course, the regulation, understated 64ps). The sports-proven ratios of the Alto Works’ transmission are also what you get in the Kei works and an LSD is a standard stock item, so acceleration grip will be good on the 2WD version of this mini sports car, and will be fantastic in the 4WD version.

I don’t find many modern cars with an interior and dash that I like. They are so bland and similar. But the Kei works interior and dash give me the fun feeling of a future sci-fi space adventure. There are also a number of convenient places in the dash to toss small items; a feature I really like. Storage and carrying capacity are one of the strong points of the Kei Works, in fact, with its rear underfloor compartments, good overall internal dimensions, and divided, fully fold down, back seats. These are good, well-thought-out cars that are practical but not at all bland. The good ground clearance and big wheels give you the confidence to do a bit of exploring on rougher roads, while the highly-tuned engine and other sports features give you a fun ride in a small car that still carries a lot.

And, by the way, there was a very nice option package with Recaro seats! The Kei Works was in production until late 2009, if I’m not mistaken, and these days there are lots of good, clean, fresh examples available here in Japan for people who want to import one directly. Although they are not old enough to clear US import regulations yet, they clear UK regs and so are straightforward to import to the UK. (For info about importing to the UK have a quick look here.)

So, with the newer, post October 1998, Japanese Kei Sports cars, you will not go wrong importing either a Daihatsu Mira Gino, or a Suzuki Kei Works.

Not Age Alone Shall Tell

But don’t go for any car just based on age alone. “If it’s younger, it’s better. Right?” Nope. Not so. The overall condition of any secondhand car that you wish to import is far more important than year of manufacture, and when we source a car for you here in Japan at the Japanese used car auctions we can arrange a pre-bid inspection of the vehicle so that you’ll have an idea of the overall condition of the car before you bid.

And speaking of age and Japanese Kei Cars, the Kei car I am in now was made in 1995, so it’s 24 years old, and it has 181,500kms on it at the moment. It’s very solid car. I would never reject any Japanese kei car merely on age alone.

Decide on the car you want to import from Japan, let us work together with you to find a good unit (especially at the Japanese used car auctions where the best deals are generally found), decide your bid and go for it. In its simplest form, that is the best way to get yourself your own Japanese Kei Sports Car.